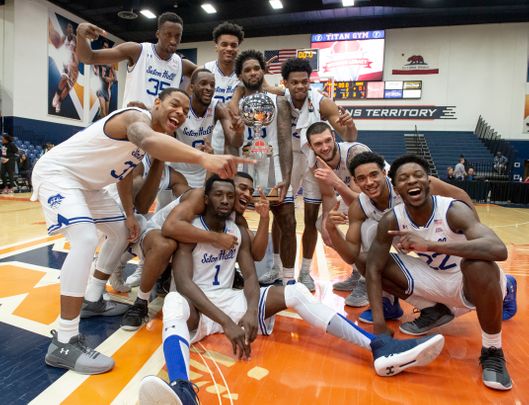 (AP) — Michael Nzei scored a career-high 21 points and made all eight of his shots to lead Seton Hall to the Wooden Legacy Championship with an 83-81 win over Miami. Seton Hall improved to 4-2. Myles Powell, who had 40 points in Seton Hall’s tournament opening win over Grand Canyon, finished with 17 points. He was named the tournament’s Most Outstanding Player, while Nzei was named First-Team All-Tournament. “It’s important, especially after the Nebraska game and the St. Louis game (both losses). It erases a tough start,” Pirates coach Kevin Willard told Gary Cohen and Dave Popkin during 970-AM’s postgame radio interview via Jerry Carino. “I love their energy, I love their fight. They showed me something these three games. Now we have to build on this and get better.” The Big East has now won four November tournaments: Seton Hall (Wooden), Villanova (AdvoCare Invitational), St. John’s (Legends Classic), Creighton (Cayman Islands Classic). The Hurricanes (5-1) suffered their first loss of the year. They shot 67 percent from the field in the first half, while Seton Hall shot 57 percent.

THAT’S WHAT WE DO! #HALLin pic.twitter.com/ufgE2QFibk

With Seton Hall leading 82-80, Ebuka Izundu went to the free-throw line in the bonus situation with 40 seconds left. He made the first but missed the second and Miami trailed 82-81. Seton Hall was trying to run the clock out and tuned the ball over with 16 seconds left. Miami’s Anthony Lawrence missed a 3-pointer from the wing. Myles Cale was fouled and made one of two free throws with one second left to preserve the win for Seton Hall. Miami and Seton Hall were tied at 45 at halftime.