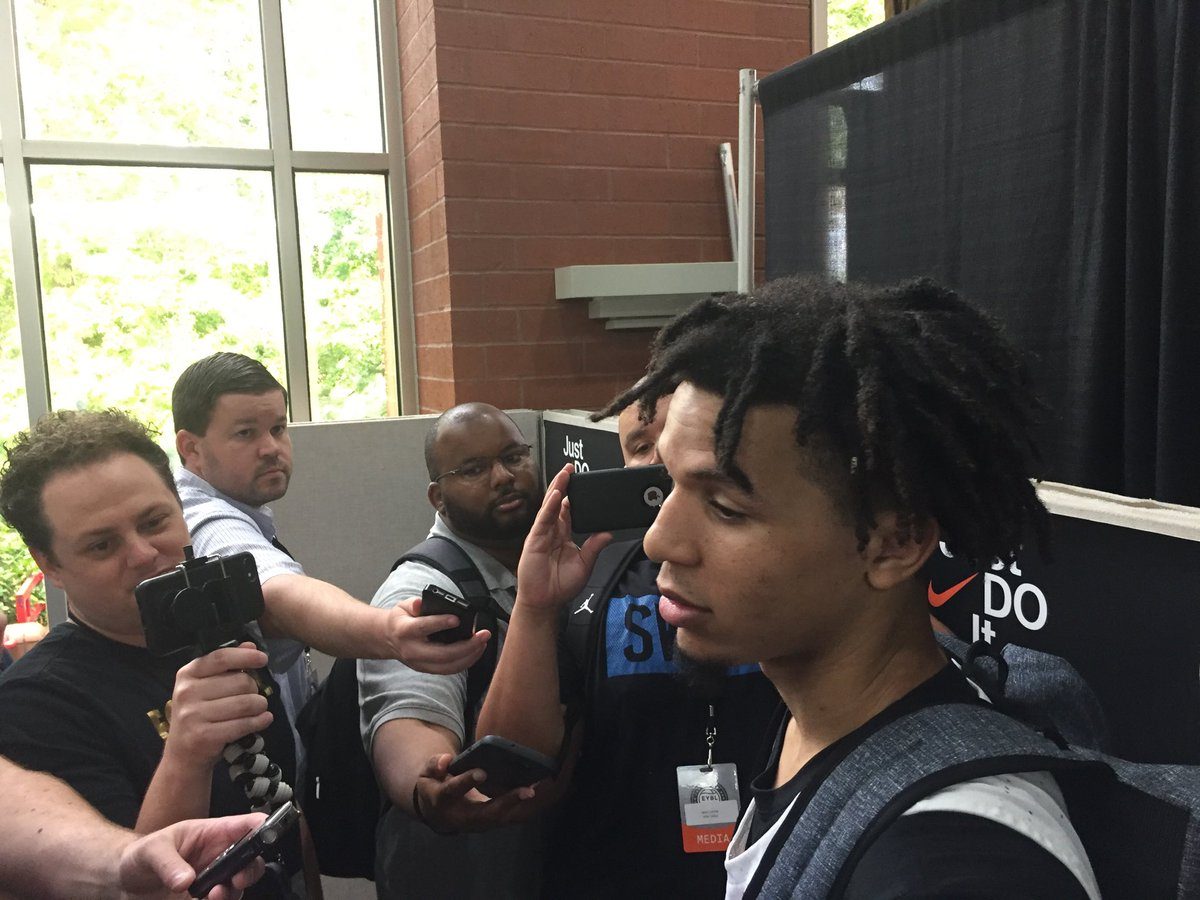 By ADAM ZAGORIA NORTH AUGUSTA, S.C. — Cole Anthony says he doesn’t know yet where he’ll be spending his senior year of high school, but it won’t be at New York powerhouse Archbishop Molloy, his home for the last three years. The 6-foot-3 New York City point guard, ranked No. 2 in the Class of 2019 by Rivals.com and the winner of a gold medal this summer with the USA U18 team, is looking for a new home for his senior year. “I have no idea yet,” Anthony said Friday at the Peach Jam, where he’s playing with the New York-based PSA Cardinals. Greg Anthony, the former NBA player and Cole’s father, said they have had discussions with several national powerhouses, including Oak Hill Academy (VA), Montverde Academy (FL), IMG Academy (FL) and Findlay Prep (NV), but they haven’t made a decision yet.

Cole Anthony says he has ‘no idea’ where he will play HS ball next year and says it will be hard to leave his family in NYC. Wants to win a national championship in HS. @FloHoops https://t.co/vm6O0joAyz

“It’s obviously getting close to a time where we’re going to have to really think about it,” Greg said. “We haven’t focused on it yet because we had FIBA Americas and now we got this, so that’s kind of what our focus is.” He added: “We just don’t know yet….That stuff’s not where we are right now.” Oak Hill, Montverde and Findlay traditionally compete for the Geico High School National Championship in his hometown of New York, something that’s important to Anthony. “I want to be in a position to definitely win a national championship,” Cole said. “That’s my high school goal. I want to win a national championship.” The younger Anthony says he won’t begin to really focus on his impending high school decision — or his college recruitment until later this summer. “I can probably say when the summer cools down, probably around August,” he said of making a decision on high school.

Cole Anthony on the Big Stage at Peach Jam with @PSACardinals pic.twitter.com/S2Ul2Y8Jyz

Leaving New York City for his senior year will be hard. “I mean, the toughest thing will be leaving my family because I love all of them and I’ll miss them a lot,” he said. Only a handful of recent New York City stars have stayed in the Big Apple throughout high school, most recently including Moses Brown, Anthony’s teammate at Molloy, and Isaiah Whitehead, Lance Stephenson and Sebastian Telfair, all of whom played at Lincoln. Meantime, a slew of New York City stars have departed either for New Jersey schools or New England prep schools, including Russ Smith, Kadeem Jack, Omari Lawrence and Kevin Parrom. As for his college recruitment, North Carolina head coach Roy Williams, Oregon’s Dana Altman, Louisville’s Chris Mack, Villanova’s Jay Wright, Michigan’s John Beilein and members of the Kentucky and Duke staffs have been among those scouting Anthony, regarded as the top guard in the Class of 2019. “I don’t want to single any one college out yet, because I know I’m going to forget someone,” he said when asked who was recruiting him the hardest.

Asked which of his classmates he might want to play with in college, Anthony listed Kentucky commit Tyrese Maxey and big man Armando Bacot, forward Matthew Hurt and guard Bryan Antoine, all of whom are uncommitted. “I love Matthew Hurt’s game, I love Bryan Antoine’s game,” he said. “Armando Bacot, Tyrese Maxey.” He figures to hone in on his recruitment next month. “Me and my dad will probably start to to lock in that after the summer’s over, probably mid-August,” he said. “I’ll be staying with him for a little while in Florida. We’ll probably sit down and really start to talk about it then.” Follow Adam Zagoria on Twitter And like ZAGS on Facebook