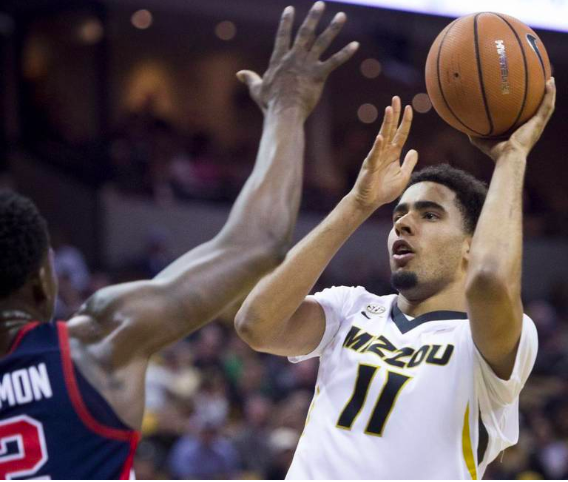 By JACOB POLACHECK Missouri freshman Jontay Porter will return to school for his sophomore season after having tested the NBA Draft waters this spring. His return was announced by the Tigers’ Twitter account on Wednesday.

“We are excited that Jontay will return,” Mizzou basketball coach Cuonzo Martin said in a release. “He had a great experience going through the pre-draft process, got the feedback that he needed to do what is best for him and he will learn from it to improve in all areas of his game. Jontay has the potential to make a big jump from his freshman season and he’ll be a great leader for us on and off the court next year.” Last season, Porter averaged 9.9 points and 6.8 rebounds per game as a freshman. He played in all 33 of Mizzou’s games and made 7 starts. His older brother, Michael Porter Jr., announced his intentions to enter the NBA Draft and sign an agent in March. Last season as a freshman, Porter Jr. averaged 14 points and 9 rebounds in only two games after returning from a back injury. Porter’s decision to return comes on the same day as the NCAA’s deadline for players who didn’t sign with an agent to withdraw from the draft and maintain their collegiate eligibility. ESPN’s Latest Mock Draft had Porter landing to the Atlanta Hawks with the No. 34 pick. Follow Jacob on Twitter Follow Adam Zagoria on Twitter