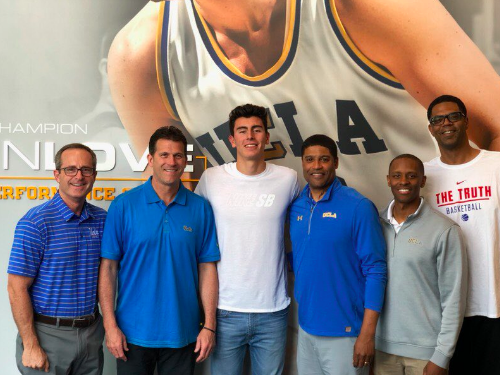 By SEAN BOCK Jaime Jaquez Jr., the 6-foot-7 small forward from Adolfo Camarillo (CA) High School, has committed to UCLA, he announced on Tuesday via Twitter.

“[UCLA] felt like the right place for me,” Jaquez told D1Vision on Tuesday via text. “The coaches did a great job of recruiting me and I felt like I could make an impact there.”

Jaquez chose the Bruins over USC, UNLV, San Diego State, Texas A&M, St. John’s, Illinois, Utah, Stanford, Georgetown, Oregon State, Pepperdine, and UCSB, among others. “It’s UCLA,” DeAnthony Langston, who coaches Jaquez on The Truth AAU program, told 247Sports. “It’s the epitome of college basketball. The coaching staff did a great job recruiting him.” Jaquez is the second commit in UCLA’s 2019 class with four-star Grant Sherfield. “I’ll feel I’ll fit into the two or three spot there,” Jaquez told D1Vision. “They run a motion and that’s what I’m used to playing in.” According to 247Sports, Jaquez is ranked as the No. 74 overall player in the Class of 2019 and the No. 6 player from the state of California. Photo: @jaquez_jr on Twitter
Follow Sean on Twitter
Follow Adam Zagoria on Twitter
And Like ZAGS on Facebook