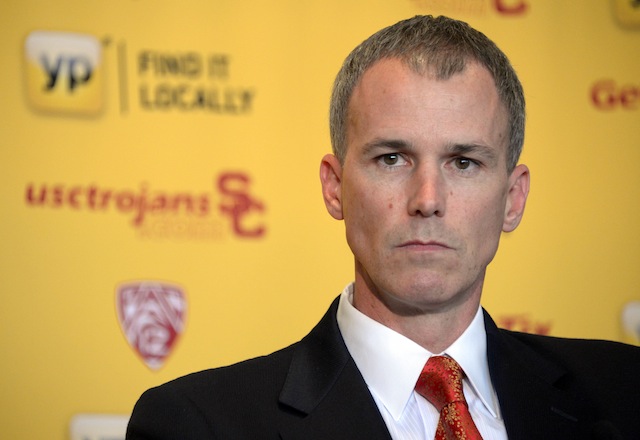 USC coach Andy Enfield has hired Eric Mobley, the father of two elite recruits and a veteran AAU coach, as an assistant coach, the school announced. Mobley, 49, coached the AAU Compton Magic 16-and-Under team in 2017 and ran the Triple Threat AAU youth basketball program since 2007. Mobley’s oldest son, Isaiah Mobley, is a 6-foot-9 power forward ranked No. 5 at his position nationally in the Class of 2019 per 247Sports.com. Evan Mobley, his 6-10 younger son, is the No. 2-ranked center in the Class of 2020. “We are excited to add Eric to our coaching staff,” said Enfield in a statement.  “He brings to our program a wealth of playing and coaching experience at a variety of levels.  He is an outstanding coach and a terrific person.” Former USC assistant Tony Bland was among the college assistants arrested last September in the FBI sting on bribery in college basketball and then fired in January. Martin Bahar, who filled an assistant coaching role at USC this past season, will return to being the program’s director of scouting, a role he held the previous two years. Eric Mobley played collegiately at Portland, where he averaged 7.2 points and 5.6 rebounds as a 1990 starter.  He then played a season at Cal Poly Pomona, where he was the team captain. (Release: Via USC; Photo: USA Today Sports)
Follow Adam Zagoria on Twitter
And Like ZAGS on Facebook