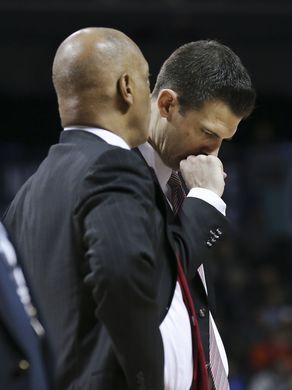 By MIKE McCURRY  NEW YORK—Plenty of uncertainty awaits Louisville in the near future. As bubbalicious a team as there is in college basketball this season, Louisville is far from a lock to hear its name called on Selection Sunday, despite what a few overly sanguine pundits have proclaimed in recent days. Also, there’s the tiny little matter of who will be coaching the Cardinals next year. It could be David Padgett, assuming the powers that be at the school determine he has done enough to shed the interim tag. Or, it could be a more experienced, highly accomplished coach such as Xavier’s Chris Mack or Wichita State’s Gregg Marshall. No matter what happens in the coming days and weeks, Louisville is probably as glad as any of the other 350 Division-1 programs in the country that March has arrived and the dawn of the season is upon us. Unless you’ve been living under a rock, you know that it hasn’t been all sunshine and acai bowls at Louisville in the last five or so months. “Their head coach that they came here to play for got relieved of his duties three days before practice starts,” Padgett said of his players, referring to Hall of Famer Rick Pitino being terminated in October for his inclusion in the FBI investigation. And that just kicked off the adversity. “I’m coaching the team by myself for three weeks. I’m not able to hire assistant coaches for the first month of the season. We have to deal with the distraction of a scandal that happened before most of them were even here. It just kind of goes on and on.” At the ripe age of 33-years-old, Padgett, who played for Louisville as recently as a decade ago, was left to clean up the mess. It’s never easy for an incumbent coach to replace a legend. Just ask Kevin Ollie, Josh Pastner, and countless others. Now, add in escorts, stripped banners, the ousting of a mentor, assistant coaches—heck, the athletic director too for that matter—and the accompanying sideshow. That’s the perpetual noise Padgett and his players could not escape. Could you? The fact that Louisville is even flirting with the NCAA Tournament while their surrounding world burst into flames is commendable. “The way these guys, for being 18-to-22-years-old, have handled it is absolutely remarkable,” Padgett said. Whatever happens on Sunday, they deserve a ton of credit for that publicly, because so many times this year they could have just folded up and said, this is not why we came here. They could have felt sorry for themselves. And not one single time throughout the last four or five months did they do that. And I mean that with all sincerity.” Padgett warrants a major assist for that. Following Louisville’s 75-58 loss to No. 1 Virginia on Thursday in an ACC Tournament quarterfinal, senior point guard Quentin Snider extolled Padgett for permeating confidence in the locker room day-in and day-out, even after defeats. “He’s going to be a great coach,” Snider said. “He’s just learning right now, so you gotta give him time.” But how much time does Louisville have? Clocks at blueblood schools tend to tick a little quicker than most. Only time will tell. An at-large bid to the Big Dance would help. Normally, Louisville settles only for Elite Eight showings, not NCAA Tournament appearances. But, in case you remain a little unsure, this has been anything but a normal year. In a lose-lose situation burdened my tumult and controversy, Padgett led the Cardinals to 20 wins and a 9-9 finish in a top-two conference in college basketball. Will it be enough? Give Louisville credit for this—they’ve been consistent all season. Consistently mediocre? Yes. They’ve won games they’re supposed to—they don’t have a single Quadrant-3-or-worse loss—while repeatedly failing to capitalize against upper-tier competition—they lack a single RPI Top-50 win and own just four Quadrant-1 victories: twice vs. Florida State plus road triumphs at Virginia Tech and Notre Dame. Padgett believes that alone merits a punched ticket. “People will say, well, maybe you guys haven’t done as much right as other people and all that, but not having done something wrong is doing something right,” Padgett said. “We’ve played a very, very difficult schedule, under very difficult circumstances this year, and my guys have 120 percent earned an opportunity to have their name called on Sunday.” The committee is not one to award sympathy bids. Louisville might very well be NIT-bound. And even if they were to qualify for the NCAA Tournament, staying true to their average, the Cardinals would likely sneak in as an 11-seed and bow down to a 6-seed in the first round. (Entering Thursday, Louisville appeared on 68 percent of the projected brackets according to Bracket Matrix with an average seed of 11.) Given the situation, however, Louisville’s 2017-18 campaign need not be determined by wins, losses, or postseason tournaments. This isn’t to say the right thing for the school’s brass to do is remove Padgett’s interim label and give him the keys to rebuilding the program. But, accounting for how hard his players fought and gutted it out in a year-long firestorm, Padgett ought to be considered a legitimate candidate, not simply the guinea pig and fall guy. “Just getting the opportunity to coach these guys day-in and day-out has been the best experience of my basketball career, both as a player and a coach,” Padgett said. Photo: Courier-Journal Follow Mike on Twitter Follow Adam Zagoria on Twitter And like ZAGS on Facebook