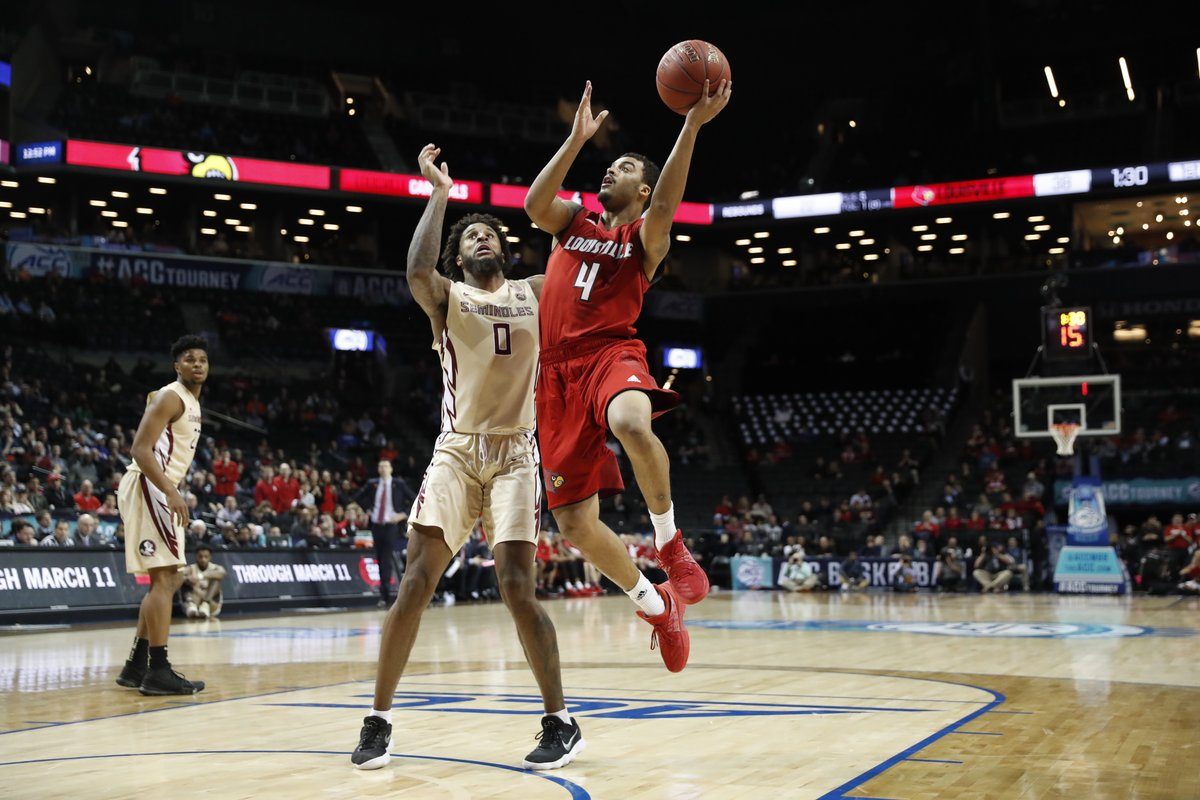 By ADAM ZAGORIA NEW YORK — Entering the day, Louisville was among Joe Lunardi’s “First Four Out” and needed to beat Florida State to keep its NCAA Tournament hopes alive. Consider that requirement met as the No. 9 Cardinals downed No. 8 Florida State, 82-74, in the second round of the ACC Tournament at Barclays Center to set up a quarterfinal matchup with No. 1 Virginia at noon on Thursday. “This win certainly helps [our NCAA Tournament résumé],” Louisville coach David Padgett said. “I’m sure this significantly helps our résumé but our focus turns now to the No. 1 team in the country. If we’re able to come out and get a win against the No. 1 team in the country tomorrow, I’m sure that we would be in.”

Louisville advances to Thursday’s quarterfinal to take on Virginia, marking the one-week anniversary of their quirky, surreal, very-March-like contest. https://t.co/1X69TPVyfS

Louisville (20-12) lost both games to Virginia this season but fell 67-66 in their most recent matchup, March 1 in Louisville. “We’re looking forward to getting another shot at Virginia because we know we can beat any team in the country,” said Louisville’s Deng Adel, who had 15 points and 8 boards in Louisville’s win Quentin Snider went for 19 points, 6 assists and 5 rebounds and Ray Spalding had 18 points. Dwayne Sutton added 10 points. Louisville made 10-of-16 from beyond the arc (63 percent). By beating the Seminoles (20-11), Padgett accomplished something Rick Pitino never did–win a game in the ACC Tournament. Padgett remains the Louisville coach on an interim basis after he replaced the fired Pitino last October. Padgett’s long-term fate remains in the air while Louisville searches for a new President. “We’re just going to focus on Virginia and try to get this win tomorrow,” Snider said. “If we just continue to win I think the rest will take care of itself,” Adel said. PJ Savoy and Trent Forrest scored 14 apiece for FSU and Phil Cofer had 12. In other games Wednesday, No. 5 N.C. State meets No. 12 Boston College; No. 7 Virginia Tech faces No. 10 Notre Dame; and No. 6 North Carolina meets No. 11 Syracuse.   BOWMAN, ROBINSON LEAD BC PAST N.C. STATE Jerome Robinson and Ky Bowman combined for 50 points to lead No. 12 Boston College past No. 5 N.C. State, 91-87, at Barclays Center. Robinson went for 26 points, 5 assists and 2 rebounds, while Bowman had 24 points, 6 rebounds and 4 assists. Nic Popovic added 15 points and 7 rebounds. It marked the first time since 2006 that BC has won two ACC Tournament games. “When you look at those guards, I thought they played extremely well tonight,” N.C. State coach Kevin Keatts said of Robinson and Bowman. “They could be the best backcourt in the ACC.” The Eagles (19-14) will face No. 4 Clemson in the quarterfinals at 2 p.m. on Thursday “I want these guys to enjoy this moment and not worry about Clemson yet,” said BC coach Jim Christian, a Bethpage, N.Y. native. “We just have to regroup and refresh. To get an opportunity to play in the quarterfinals of the ACC Tournament is a huge step for us.”

Jerome Robinson, the ACC’s leading scorer, can score in a multitude of ways. Here’s one. Commendable effort on the boards by Steffon Mitchell (14 rebounds) to keep possession alive. pic.twitter.com/3I7O9Agjqm

Allerik Freeman had 21 for N.C. State, and Omer Yurtseven 20 points and 9 rebounds. Sam Hunt and Torin Dorn scored 13 apiece. N.C. State was a No. 9 seed entering the day, per ESPN’s Joe Lunardi. “I’m excited about our team,” Keatts said. “Our body of work is pretty good when you look at what we’ve done in a short amount of time. “I’m excited about it. I’m excited for these guys, for the opportunity.” Photo: @LouisvilleMBB Follow Adam Zagoria on Twitter And like ZAGS on Facebook