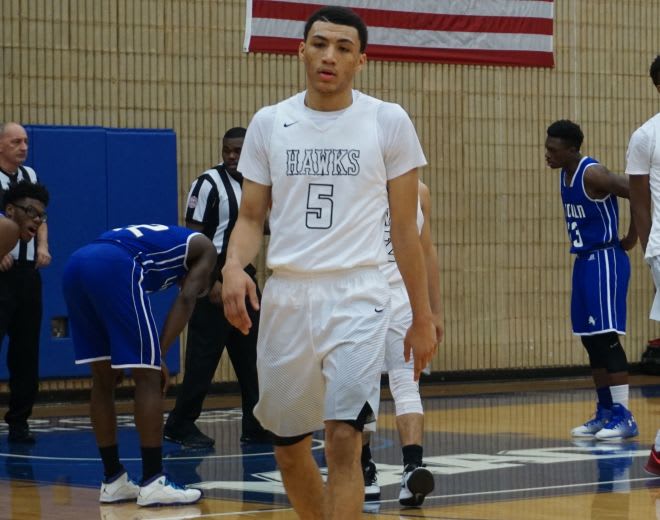 Jahvon Quinerly, the 6-foot-2 McDonald’s All-American point guard from Hudson (N.J.) Catholic, will announce his college choice on Wednesday, a source confirmed to ZAGSBLOG. Pat Lawless first reported the news late Sunday night. Villanova has long been the perceived favorite for Quinerly, who decommitted from Arizona in October in the wake of the FBI investigation into bribery in college basketball. Oklahoma, Oregon, Seton Hall and Rutgers have also been linked to Quinerly during his second go-round in recruiting. “I’ve got to wait, I’m just planning on just focusing on the season,” Quinerly told NJ.com back in November when teammates Luther Muhammad (Ohio State) and Louis King (Oregon) both signed Letters of Intent. “I’m not really paying it any attention, I’m just focusing on the season and just being there for my teammates right now.” Quinerly initially considered Villanova, Seton Hall, Virginia and Stanford, among others, before choosing Arizona in July. Since then he has been heavily linked to Villanova, which is in need of a point guard in the Class of 2018, with Jalen Brunson expected to turn pro. The Wildcats have received NLIs from shooting guard Brandon Slater and small forward Cole Swider.

The NCAA late signing period runs April 11-May 16. By committing Wednesday, Quinerly will get his decision over with before the New Jersey state tournament begins Feb. 27. Hudson Catholic is among the favorites to win the New Jersey Tournament of Champions, but could face a tough draw in the brutal North Non-Public B bracket, including a potential second-round matchup with No. 12 seed the Patrick School, last year’s Tournament of Champions winner, and a potential sectional semifinal meeting with Roselle Catholic, which nearly knocked off Montverde (FL) Academy, the No. 1 team in the nation, on Friday night at Kean University. “I’m really excited for them,” Hudson Catholic coach Nick Mariniello told NJ.com of his signed players. “I’m glad that part of it’s over, now I can just concentrate on coaching the team because we have a lot of expectations.”We have a lot of unfinished business as a team… to see them grow as a student athletes and have an opportunity to go to college for free, and because they’re all qualified, now you just enjoy coaching them.” Follow Adam Zagoria on Twitter And Like ZAGS on Facebook