Former Cleveland State coach Kevin Mackey says he made up Manute Bol's birthdate, Bol could have been in his 40s when he played in NBA | Zagsblog
Follow @adamzagoria

Former Cleveland State coach Kevin Mackey says he made up Manute Bol’s birthdate, Bol could have been in his 40s when he played in NBA 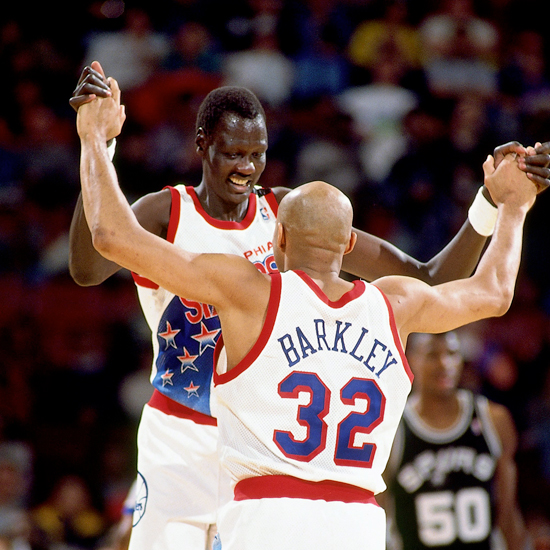 By ADAM ZAGORIA According to Wikipedia, former NBA big man Manute Bol was born on Oct. 16, 1962 and was 47 when he passed in 2010. But Kevin Mackey, the former Cleveland State coach who brought the 7-foot-7 Bol to the United States from the Sudan in the mid-1980s, tells a different story. “I gave him his birthday because they didn’t know how old he was,” Mackey, now a scout with the Indiana Pacers, told ZAGSBLOG. Bol’s son, 7-foot-2 Bol Bol, signed a National Letter of Intent with Oregon on Monday, giving the Ducks the No. 1 recruiting class in the nation, according to 247Sports.com. According to Wikipedia, Bol Bol was born Nov. 16, 1999 in the Sudan, when his father was supposedly 37. But Mackey says Bol was probably much older and could have been in his 40s or even 50s when he played in the NBA. According to Wikipedia, Manute played in the NBA from his early 20s until his early 30s for various teams, including the Washington Bullets, Golden State Warriors and Philadelphia 76ers. “Every athletic door is open at 19, every athletic door is closed when you’re 35,” said Mackey, 71. “He was probably 40, 50 years old when he was playing in the NBA.” Bol’s Wikipedia bio even hedges on his actual birthdate, saying, “He is believed to have been born on October 16, 1962.” Mackey arranged for Bol to fly from the Sudan to Boston in 1985. He said when he went to meet the plane, Rick Pitino who coached at Boston University and Providence College in the 1980s, was coming off the same plane. “He says, ‘Kevin, there’s some guy in the back of the plane, you can’t believe how tall how is,'” Mackey recalled Pitino saying. “I said, ‘Oh, really,'” Mackey recalled. “I couldn’t tell him I was waiting on Manute.” From Boston they flew to Cleveland, where Mackey was coaching a Cleveland State team that would reach the Sweet 16 of the NCAA Tournament in 1986. “[Bol] had no idea of his age and the kid who came over with him didn’t know how old he was,” Mackey said. “No one knew how old he was. “The immigration people were in the office [at Cleveland State] and they thought it was great. They loved it. And they were big fans of Cleveland State, they used to come to all our games. They wanted to cover themselves because Manute was starting to get so much publicity. His picture was in the paper. He was on the 6 o’clock news because he was a such a different looking guy than everyone else. At that time, no one had ever seen anything like it.” So at that point, Mackey worked with the local immigration office to come up with a birthday for Bol, Oct. 16, 1962 “It was in October, I wanted to make it after Sept. 1,” Mackey said. “I wanted to make sure he was young enough because he didn’t have an age. I think he was [in his 40s], I really do. But there’s no way of ever really knowing.” Bol never ended up playing for Cleveland State because he couldn’t speak English well enough. He enrolled at the University of Bridgeport, a Division II school, and played there in the 1984–85 season before getting selected 31st overall by the Washington Bullets in the 1985 Draft. In 1988, Cleveland State was placed on two years’ probation for providing improper financial assistance to Bol and two other African players. “They sniffed around for four f**king years, and that’s all they could come up with,” Mackey told GQ in 1992. “I told the motherf**kers ‘Look at my guys—they’re wearing fake gold and driving old cars. For Christ’s sake, go find a program with real money.’ But they had one guy on the committee who was all upset because the Africans were taking scholarships away from American players. “Besides, Manute never played one f**king game for Cleveland State. We knew we couldn’t get him into school, but what were we supposed to do, send him back? He refused to go. His people were starving back there. The bottom line is, we got zero competitive advantage, none, and they hit us with three years f**ing probation.” Bol was quoted in 1987 as saying: ”I read in the newspapers that the N.C.A.A. says Coach Mackey gave me money and a car. ‘If that’s true, where’s the car? Where’s my money? Why would I leave Cleveland State if they gave me money and a car?” As for Mackey, he was fired by Cleveland State in 1990 in the wake of alcohol and substance abuse problems that led to his arrest. In 2004, Larry Bird hired Mackey as a scout with the Pacers because he had long been an admirer of his. Mackey has since scouted — and advocated for — players like Pacers guard Lance Stephenson. Follow Adam Zagoria on Twitter And like ZAGS on Facebook