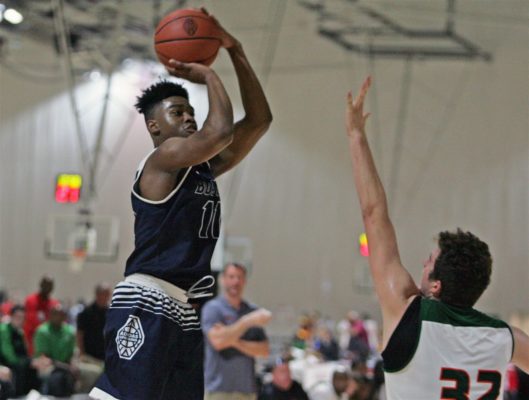 Providence on Sunday landed a pledge from A.J. Reeves, a 6-foot-6, 195-pound shooting guard from Chestnut Hill (MA) Brimmer & May and the Mass Rivals AAU program.

“I chose Providence because when I went to visit the school I got such a great feel from the coaches,” the Roxbury, Mass., native said. “Coach [Ed] Cooley and the staff really made the impression that they are going to work with me on the court so that I could reach my dream of playing in the NBA. Also I felt the impression of the coaching staff helping me become a better man and setting me up for great success with life after basketball.”

Ranked the No. 15 shooting guard in the Class of 2018 per 247Sports.com, Reeves had previously narrowed his list to a four of Louisville, Providence, Villanova and Virginia.

“I am a scorer who can put the ball in the basketball numerous ways and I’m a great leader,” he said. “I’m also an energy guy on the defensive side of things, whether that’s getting big steals or blocks or rebounds to push and find either my teammates or my shot on the break.”

Reeves is the first Class of 2018 pledge for head coach Ed Cooley and his staff.