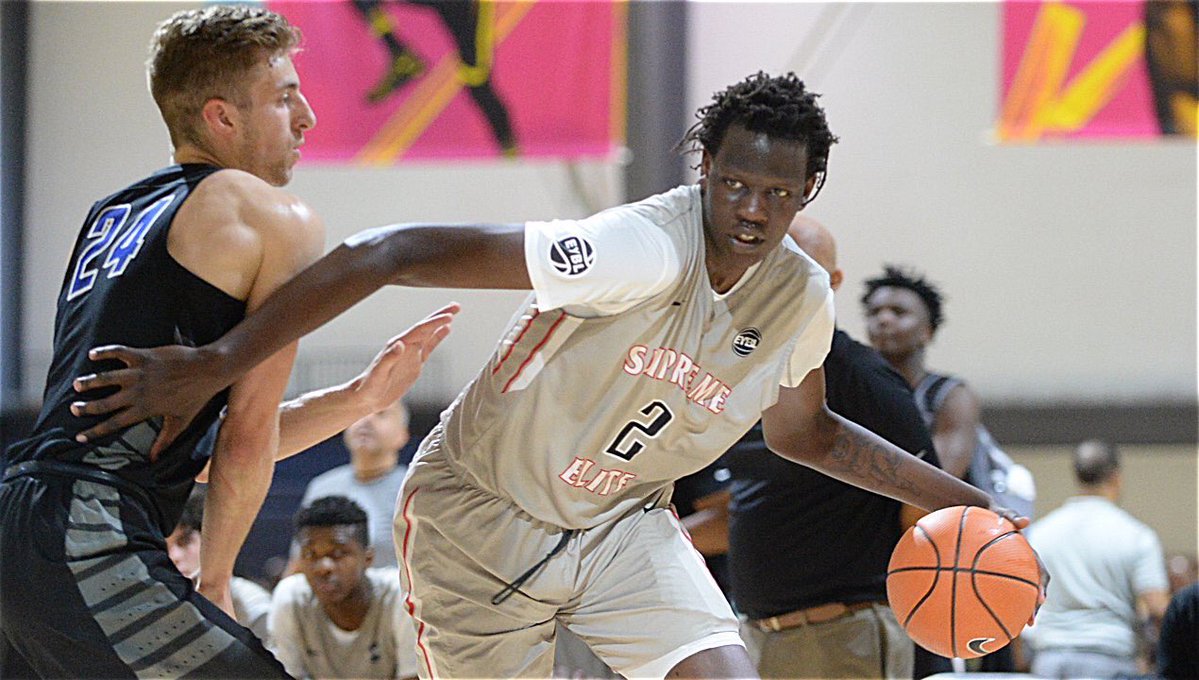 By JACOB POLACHECK **Bol Bol, the 7-foot-2 power forward from Mater Dei (CA) High School, spoke with Ben Roberts Monday about his relationship with Kentucky head coach John Calipari, who recently offered Bol last month (May 1) and has been coaching him at the Team USA Training Camp this week in Colorado Springs, CO. “That’s kind of crazy,” said Bol about the possibility of playing with Team USA’s U-19 squad in Cairo, Egypt at the FIBA World Cup. “It would definitely be fun. Because I obviously don’t remember when I was there.” Bol, who is from the Sudan, spent several months in Cairo as a child, while they were unable to enter the United States with Visa troubles. Playing with Cal Supreme this spring, Bol was recently named the MVP of the Nike EYBL regular season after averaging 24.1 points, 10.0 rebounds and 4.5 blocked shots per game. He also shot 49 percent from three-point range and led his team to a 13-3 record. In April, with Calipari in attendance, Bol scored 33 points, went four of six from the three-point line, and was dominant on defense. Three days later, Kentucky offered Bol. “I just saw Coach Cal on the baseline, so I just tried to play the best that I could,” Bol said. “It was kind of crazy. I never thought I would get an offer from Kentucky.” Bol told Roberts that UK, Arizona, UCLA, Oregon and Southern Cal are the schools he’s hearing from the most. Kentucky seems to be the frontrunner but Bol doesn’t seem to be nearing a decision, as he said, “I’m taking my time. I might be the last person to make my decision. There’s no reason to rush.” IMMANUEL QUICKLEY TALKS TOP FOUR AT U-19 TRIALS **Immanuel Quickley, the 6-foot-3 point guard from John Carroll (MD) School, spoke with Kyle Tucker of SEC Country about his top four of Kansas, Kentucky, Maryland, and Miami on Monday. He briefly broke down each school: Kansas: [It’s about] their player development, what they did with Frank Mason, who went from a school around my area and ended up winning National Player of the Year, is really cool.” Miami “It’s their tradition, what they’ve done with DMV (D.C.-Maryland-Virginia area) players like myself.” Maryland: “[They’re] always going to have an advantage because they’re close to home and if I were to go there, my family would be able to see me play.” He also spoke in detail about the Kentucky Wildcats. “It really means everything, because you don’t want to go somewhere the players haven’t been successful in the same position,” said Quickley, whose goal in Team USA camp is to show Calipari “that if I were to go to Kentucky, I could carry the torch for whatever point guard I come after.” According to 247Sports Crystal Ball Predictions, Kentucky has a 73 percent to land Quickley. He is ranked as the No. 9 overall player in the Class of 2018 and No. 2 point guard. “What they’ve done with their players, that does give them an advantage,” said Quickley. He refrained from saying whether Kentucky was his top choice. Follow Jacob on Twitter