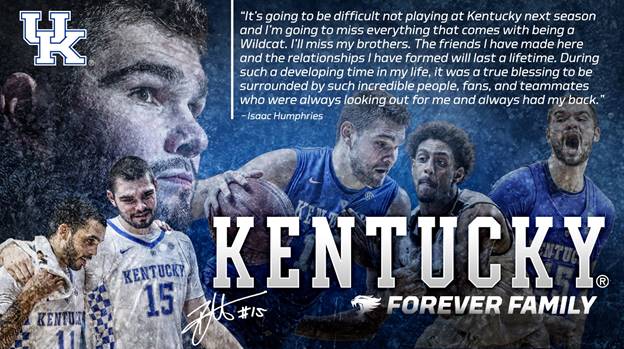 Kentucky sophomore forward Isaac Humphries is turning professional. The 7-foot Humphries will pursue options in the NBA and internationally.

Humphries plans to sign with an agent, which would effectively end his collegiate eligibility at Kentucky.

“First and foremost, I want to thank the Big Blue Nation for its unwavering support,” Humphries said. “Coming from Australia, I had no idea what to expect when I got to Kentucky, but you made me one of your own. Your support and passion over the last two years has been unbelievable. I can’t thank you enough for making me feel at home.

“This decision didn’t come easily for me. My goal has always been to play professionally. There is no better place to prepare you to take that step than the University of Kentucky. Over the last two years, thanks to Coach Cal and the coaching staff, I’ve gotten so much better and improved my game. I believe I have a lot more I can do, but I also believe that the time for me to take the next step is now.

“At the end of the day I have to do what I believe is best for myself and my family. I know turning pro is going to be the hardest thing I’ve ever done. I understand that these next few weeks and months with the pre-draft process is going to take a lot of hard work and maybe some realistic truths. But, because of what I’ve learned at Kentucky and the support I have from my family and this school, I also feel like I’m ready to face those challenges and that I’m prepared for whatever is next and wherever that may take me.

“It’s going to be difficult not playing at Kentucky next season and I’m going to miss everything that comes with being a Wildcat. I’ll miss my brothers. The friends I have made here and the relationships I have formed will last a lifetime. During such a developing time of my life, it was a true blessing to be surrounded by such incredible people, fans, and teammates who were always looking out for me and always had my back.”

Humphries is the fifth underclassman from the 2016-17 Wildcats to announce intentions of turning pro. Guards Isaiah Briscoe, De’Aaron Fox and Malik Monk have declared for the draft and either signed with an agent already or plan to. Freshman forward Bam Adebayo declared for the draft but will not hire an agent at this time, opening up the possibility of a return.

“This was a difficult decision for Isaac but one that he and his mom put a lot of thought into,” head coach John Calipari said. “Isaac has gotten so much better in his two seasons here and I believe he’s only begun to scratch the surface of his true potential. I absolutely understand and fully support his decision and I will do whatever I can to help his dreams come true. You’re talking about a 7-footer who can shoot and can rebound. That has value anywhere in the world. He’s also just 19 years old, the youngest sophomore in the country this past season. Everyone forgets how young he is and how much he’s going to continue to grow and develop. He’s only going to get better and better. My belief is what you saw at the end of this season is just the beginning of his pro career.”

The 7-footer from Sydney played a key role off the bench in each of Kentucky’s last two Southeastern Conference regular-season and tournament championships. Humphries averaged 2.8 points and 2.8 rebounds while shooting 51.1 percent from the floor during his sophomore season.

Playing alongside some of the best talent in the country, Humphries made the most of his opportunities when he got them, most notably in last month’s Elite Eight matchup vs. North Carolina. Playing in a season-high 21 minutes under the national spotlight, Humphries scored a career-high 12 points on 5-of-8 shooting. More importantly, he scored eight points during a 10-2 UK run that gave the Wildcats a 64-59 lead with 5:10 to play. The effort nearly willed Kentucky to the Final Four.

A late summer addition to the 2015-16 roster, Humphries earned valuable minutes late in the year, breaking out with a six-point, 12-rebound game at Texas A&M.