Handicapping the Conference Player of the Year Races: Big Ten 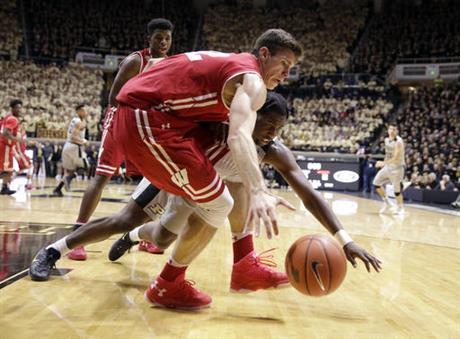 We at ZAGSBLOG have decided to observe the final weekend of the regular season by assessing the Player of the Year races for each of the top six conferences. The Big 12 edition can be found here. The ACC edition can be found here. The Big East edition can be found here. Stay tuned for the SEC and Pac-12 discussions. By: MIKE McCURRY With all due respect to point guards Melo Trimble and Derrick Walton Jr., the debate surrounding the Big Ten Player of the Year is simply bigger than them. Literally. In a competition reminiscent of the 2011-12 campaign, when Michigan State’s Draymond Green and Ohio State’s Jared Sullinger duked it out for the league’s most prestigious individual award, this season features a two-man race consisting of Purdue’s Caleb Swanigan and Wisconsin’s Ethan Happ. Having to pick one of either Swanigan or Happ is similar to choosing between Jessica Alba and Sofia Vergara—you can’t go wrong either way. Swanigan, the Boilermakers’ 6-foot-9, 250-pound man-child nicknamed “Biggie,” has 24 double-doubles and pulls down 12.5 rebounds per night, both of which would lead the country were it not for Seton Hall’s Angel Delgado. Biggie has registered four 20-20 games this season—only one other player in America, Missouri State’s Alize Johnson, has even recorded multiple such stat lines. Swanigan has traversed an incredible yet simultaneously heartbreaking journey to get to this point, one that has been well-documented throughout the year (perhaps most elegantly by ESPN’s Myron Medcalf). His childhood would have been tumultuous enough if the misfortune ceased with him checking into nine elementary schools, four middle schools, and five homeless shelters. On top of that, obesity has governed his entire life—his nearly 500-pound father passed away a few years back, and Caleb himself weighed 360 pounds entering eighth grade.

@go_around_me This will bring you back to Twitter (web), but it's the video link.https://t.co/VCHhiVCbV5

Then there’s Happ, who at 6-foot-10 and 232 pounds is on the verge of leading the Big Ten in steals for the second consecutive season. The redshirt sophomore, who also leads Wisconsin in points, rebounds, assists, and blocks, might just be the Defensive Player of the Year—on the national level, that is; not solely in his league (keep an eye on No. 22 in red in the clip below).

Swanigan’s per-game averages (18.6 points, 12.5 rebounds) are overwhelming enough on their own to sway a voter toward siding with Biggie over Happ (14.0 PPG, 8.9 RPG), but it’s important to consider the molasses-like tempo that Wisconsin plays at. Out of 351 Division-1 programs, only 19 play slower than the Badgers, who average 63.6 possessions per contest. Purdue, on the other hand, is ranked 115th in KenPom’s adjusted tempo metric (69.2 possessions). Let’s not overlook the fact that six additional Boilermakers’ possessions per game (which amounts to three additional games over the course of the season) could inflate Swanigan’s counting stats at a not insignificant rate. Therefore, let’s check out the frontcourt stars’ respective totals per 100 possessions entering Sunday, when Swanigan (4:30 p.m. at Northwestern) and Happ (6:00 p.m. versus Minnesota) close out the regular season. 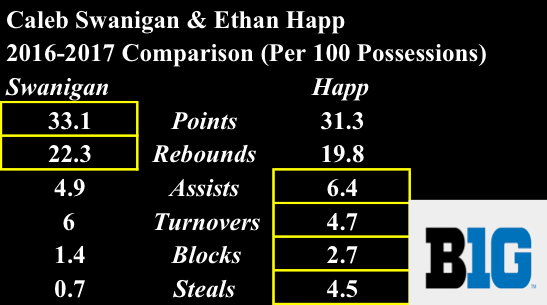 Swanigan, largely as a result of his offensive versatility (he’s made 46 percent of his threes this year; Happ has yet to attempt a shot from behind the arc during his time on-campus) takes the cake in points, while also maintaining a rebounding advantage. Happ, meantime, poses as the superior passer, is less prone to mistakes, and blows Biggie away in the quantifiable defensive categories. With the individual stats failing to anoint a clear-cut victor, what else can we go off of to determine Big Ten Player of the Year? Head-to-head matchups? We were blessed with one meeting this year. Purdue beat Wisconsin by 11 back on January 8th. Swanigan dropped 18 points and 13 rebounds but committed 8 turnovers. Happ went for 17 points, 5 rebounds 4 assists, and 6 steals en route to being dubbed KenPom Game MVP but could not lead his team to victory. Team success? No. 16 Purdue has wrapped up the Big Ten regular season title, whereas No. 22 Wisconsin is reeling, having dropped five of its last six entering Sunday. But we shouldn’t attribute wins and losses to two players, no matter how great they are. Swanigan isn’t directly responsible for Dakota Mathias’ refined three-point shot and Carsen Edwards’ breakout freshman campaign in the same way that Happ isn’t directly responsible for Nigel Hayes’ uneven play and Bronson Koenig’s gimpy calf. Statement games? Take your pick from Biggie’s game log. He collected 28 points and 22 boards against Minnesota on New Year’s Day. In two games against Michigan State, the school he initially committed to, Swanigan totaled 49 points, 32 rebounds, and 8 assists. Happ is far from a one-hit wonder himself. His career-high 32-point clinic in a comeback win over Rutgers at Madison Square Garden (in which he outscored the rest of his teammates) stands out in particular.

Both possess flaws, too. Swanigan is careless with the rock at times, leading the Big Ten in giveaways. Happ is a 49 percent free throw shooter—the “Hack-a-Happ” strategy is an actual thing. At the end of the day, no matter how one slices it, Swanigan vs. Happ is a coin flip. Barring a split vote, one will probably win Big Ten Player of the Year. The other will be robbed of the honor. Hopefully, this year plays out similar to the 2011-12 results. Green won Big Ten Player of the Year over Sullinger. Both were recognized as First Team All-Americans. Michigan State won the league tournament and advanced to the Sweet 16. Ohio State went all the way to the Final Four. Oh, and the two went head-to-head in the Big Ten Championship. Wouldn’t that be something if history repeated itself this March. Mike’s Pick: Ethan Happ Adam’s Pick: Caleb Swanigan Photo: AP Follow Mike on Twitter Follow Adam Zagoria on Twitter And like ZAGS on Facebook 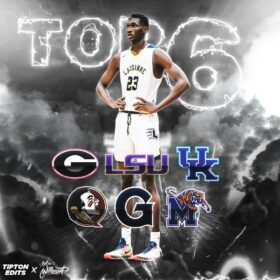