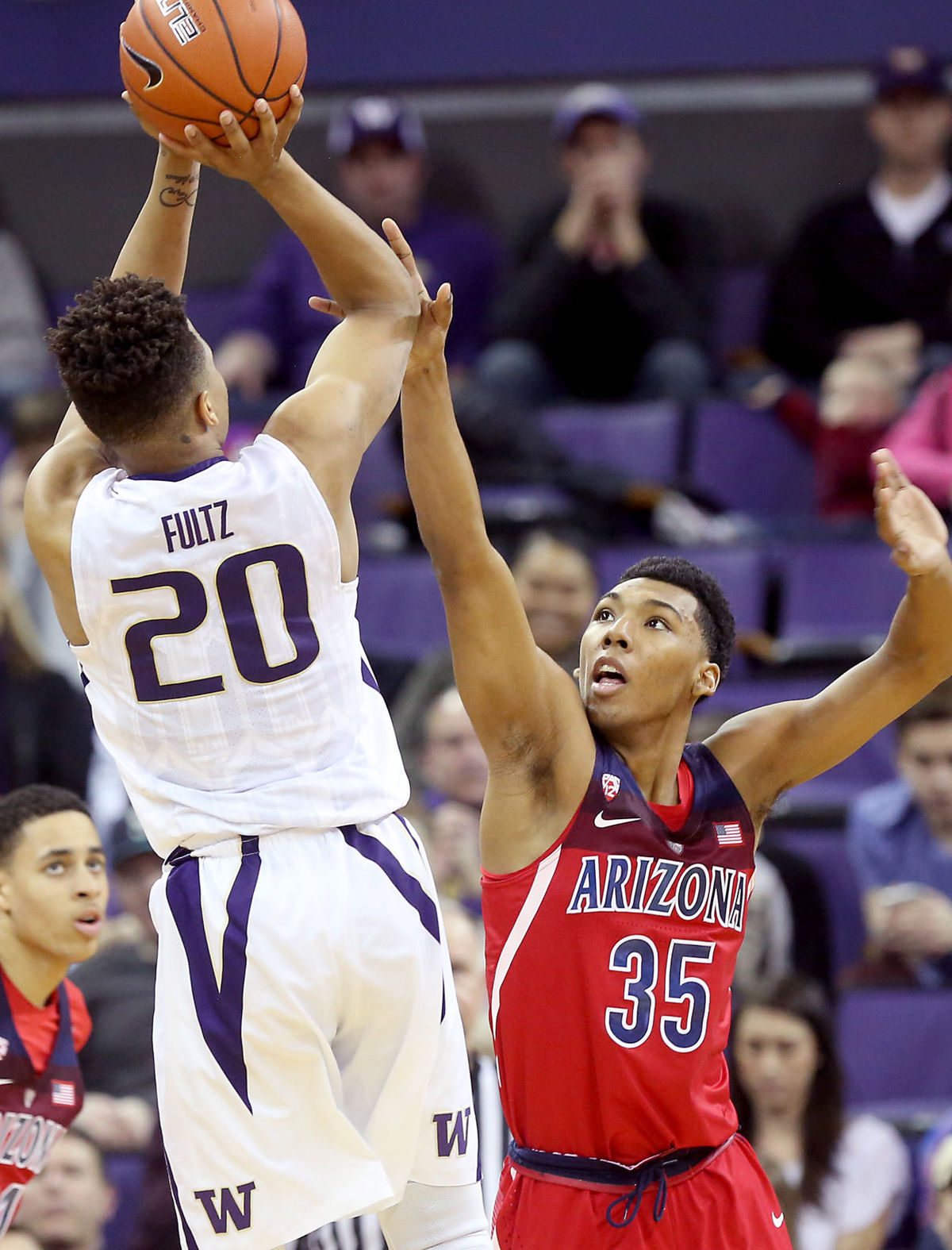 By MIKE McCURRY Playing without two starters, Arizona got all it could handle on Saturday at Washington in what was likely Markelle Fultz’s final home game. The undermanned Wildcats still found a way to win, 76-68, mainly as a result of fellow likely one-and-done Lauri Markkanen. Fultz, projected as the first overall pick in the upcoming NBA Draft according to Draft Express, dropped 26 points on 7-of-16 shooting and 6 assists.

Markkanen, who Draft Express projects to be the No. 7 pick, also had 26 points plus 13 rebounds, doing most of his damage inside the paint against an overmatched Huskies’ frontline.

Washington native Allonzo Trier also came up big for Arizona, scoring 21 points. The Wildcats, who improved to 14-1 in Pac-12 play with the victory, were without usual starters Kadeem Allen (dislocated pinkie) and Dusan Ristic (sprained left ankle). Here are five quick thoughts from this one. 1.     At least Washington showed up…  Washington is 9-18 overall, including 2-13 in Pac-12 play. The Huskies have dropped nine straight games, matching the longest losing streak in program history. It’s not exactly all sunshine and flowers out in Washington right now (actually, is it ever?). But at least UW didn’t merely crawl into a fetal position and succumb to No. 5 Arizona. Washington put a little scare into the heavy favorite, shooting a higher percentage from the floor while becoming only the sixth Wildcats’ opponent this season to score at least one point per possession. The team showed up, as did the fans. Head coach Lorenzo Romar, undoubtedly on the hot seat—Saturday could be his last home game too, after all—thanked the 9,482 guests in a rather classy gesture.

An emotional Lorenzo Romar takes the microphone and addresses the crowd afterward: pic.twitter.com/1GlWP4TTPF

2.     Mark this down as another gutty win for Arizona… Not only was Arizona without Allen, who would have likely guarded Fultz all night long, and Ristic, but the Wildcats also overcame a rough shooting night from their two talented freshman wings. Rawle Alkins and Kobi Simmons, who came in averaging a collective 23 points, combined for just 5 points against Washington on 2-of-15 shooting. It’s too early to tell whether this is a matter of Alkins and Simmons hitting their freshmen walls, struggling to adjust to life with Trier, or a single-game anomaly. It’s not too early, however, to applaud head coach Sean Miller for grinding out a win in which he only played seven guys, two of whom are key contributors and gave the Wildcats next to nothing on the offensive end. 3.     Chance Comanche came up big in his first career start… Wildcats’ sophomore Chance Comanche, who possesses a definitive NBA body, responded really well to his first career start. The 6-foot-11 forward went for 13 points and 7 boards in a career-high 32 minutes. He was active on defense, blocking two shots and altering countless others, and looked comfortable offensively despite being thrust into a higher-usage role.

Comanche has actually enjoyed a quietly productive last two weeks, putting up 10 points and nearly 6 boards over his last four contests. This hot stretch may result in more playing time even when Ristic returns. 4.     Fultz is the real deal… It’s kind of ridiculous that this even needs to be said for a kid who could hear his name called before anyone else’s at this June’s NBA Draft, but lately I’ve seen far too much criticism directed at Fultz, ranging from the blame he deserves for Washington’s disastrous season to what inferior prospects those arm-chair GM’s prefer over the Upper Marlboro, Maryland product. Fultz, who isn’t completely recovered from the knee injury that recently caused him to miss two games, has yet to mail it in or anything close to that. His head coach confirmed as much afterward. “He’s been totally invested, he’s been all in,” Romar said. “And it was very, very disappointing for comments that I heard that he was just going to lay down for the rest of the season because he’s worried about the NBA Draft.” “And the ‘pressure’ comments people have made about him because we haven’t won, ‘It’s his fault,’ he’s done everything imaginable to help our team,” Romar continued later on. The talent is silly, too—as are the stats. Fultz recorded his 12th 25-plus point game of the season on Saturday. He’s the Pac-12’s leading scorer at 23.2 points per night, and he also paces the Conference of Champions in Assist Rate (yes, higher than even Lonzo Ball). Most likely, Fultz’s remaining college career consists of four more games—three more in the regular season plus a one-and-done showing in the Pac-12 Tournament. Let’s cherish those 160 minutes instead of throwing out hot takes concerning an 18-year-old. 5.     Arizona has a big week coming up… Hopefully, at least Allen will be healed by Thursday, which begins a three-day stretch in which Arizona plays USC and UCLA. Luckily for the Wildcats, both of those games are at home, where this team simply does not lose. Still, Arizona (14-1 in Pac-12) is up just one game in the league standings, with Oregon (13-2) breathing right down its neck. The more healthy bodies Miller has at his disposal for next week, the better. Photo: Arizona Daily Star Follow Mike on Twitter Follow Adam Zagoria on Twitter And like ZAGS on Facebook