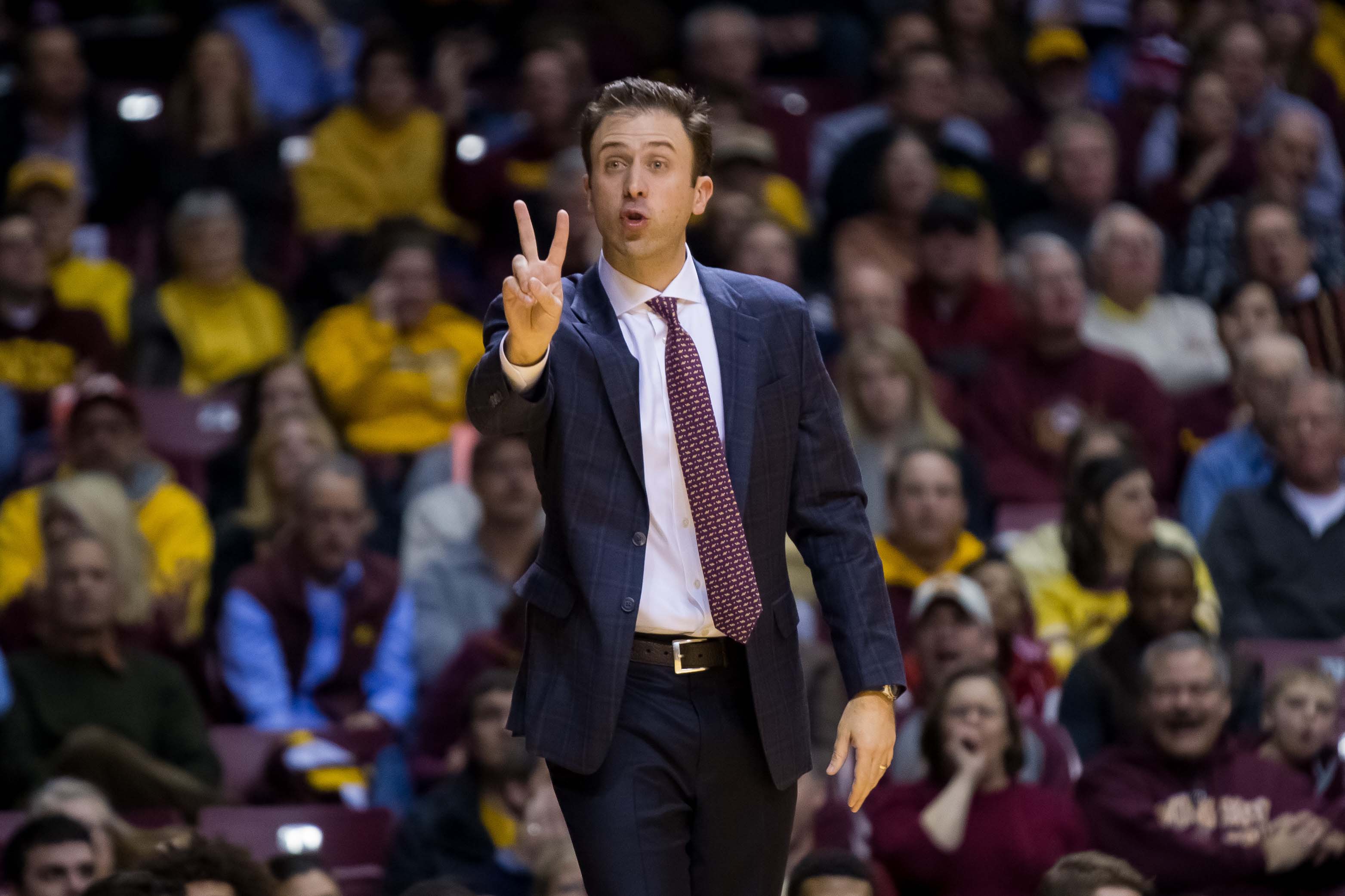 HILLSIDE, N.J. — Just about everything that could go wrong for Richard Pitino and his Minnesota team did go wrong last season. On the court, the Gophers went 8-23 overall, 2-16 in the Big Ten Conference. They didn’t win a league game until late February when they knocked off then-No. 6 Maryland and Rutgers back-to-back. Minnesota would go on to drop its final four games, including one at Rutgers on March 5 that marked the Scarlet Knights’ lone Big Ten win of the season. Off the court, Pitino on March 1 had to suspend three players — Kevin Dorsey, Nate Mason and Dupree McBrayer — after they released a sex tape on social media. A few days later, the Gophers lost senior captain Joey King to a broken foot. “Unfortunately we had to suspend some guys,” Pitino, 34, said Tuesday while recruiting at St. Patrick’s High School. “We had a bad injury to Joey King but it’s kind of one of those things where if it doesn’t kill you, it makes you stronger. And it was good for all those young guys. It was good for Nate Mason, it was good for Dupree McBrayer, Bakari Konate, Jordan Murphy. They experienced a really, really tough league and they did it on the court and I think they’ll learn from it this year.” (Point guard Dorsey transferred to Colorado State at the end of the season.) Heading into a new season, Pitino is feeling good — and well he should. On the recruiting front, the Gophers have scored two major coups in an 11-day span by landing New York City point guard Isaiah Washington and then adding New Jersey shooting guard Jamir Harris — effectively giving them their backcourt of the future. The high-scoring Washington is arguably New York’s top player at the moment, and Pitino and assistant Kimani Young were set to visit him at St. Raymond’s High School on Wednesday. On Tuesday Pitino and Young were at St. Patrick’s, the heralded New Jersey powerhouse that produced McBrayer, a 6-foot-4 guard from Queens, and now boasts Harris, who verbally committed on Wednesday morning. As for this season, Pitino believes his team is more ready to compete in the tough Big Ten with the addition of 6-9 center Reggie Lynch, an Illinois State transfer. The Gophers lost 6-8 former Texas A&M forward Davonte Fitzgerald in early October when he tore his anterior cruciate ligament, medial and lateral meniscus in what the Gophers said was a non-contact situation. “He just looked up at me and said, ‘I’ve had two of these, I know it’s another one,'” Pitino said at Big Ten Media Day, referencing Fitzgerald’s previous ACL tears. “”That was a bit demoralizing.” While at St. Pat’s, Pitino added: “We added [6-4 graduate transfer guard] Akeem Springs from Milwaukee, who was a very good player for a good team. So obviously he’s got great intangibles and he’s used to winning. “And then you add three freshmen, [6-8 guard] Amir Coffey was one of the better seniors in the country last year; [6-7 forward] Michael Hurt was runner-up Mr. Basketball in our state; and [6-9 forward] Eric Curry was a top-100 player, so it’s a much more complete team.” Hurt is the older brother of 6-9 Class of 2019 star Matthew Hurt, a potential future lottery pick who is being courted by bluebloods like Kansas, Louisville and North Carolina, as well as Minnesota. In the non-conference, Minnesota has home games against St. John’s and Arkansas. The Gophers also play at Florida State in the Big Ten/ACC Challenge and also face Vanderbilt on a neutral court. Then comes the brutal Big Ten slate with traditional powers Michigan State, Indiana, Wisconsin and Maryland. But with last year behind him, Pitino feels a whole lot more optimistic about this season. “I feel like we have the versatility, the talent, knock on wood if stay healthy,” he said, “that we can compete with anybody in our conference.” Follow Adam Zagoria on Twitter And like ZAGS on Facebook