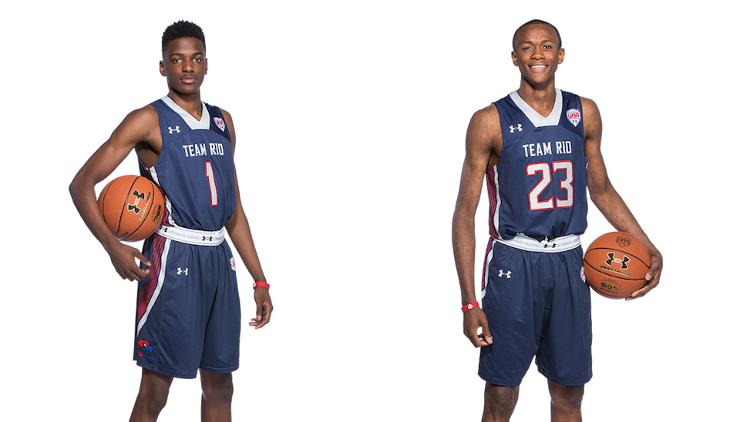 PHILADELPHIA — On Sunday morning at the Elevate HoopS Summer Showdown, there was an early treat: a game-winning three-pointer at the buzzer by Team Rio’s 2019 guard Bryan Antoine. Team Rio edged Team Final at the hands of Antoine — and his teammate Scottie Lewis — 63-60. The 2019 star guard duo displayed all of their talents in front of a hefty crowd that featured the head coach of national champion Villanova, Jay Wright, along with Indiana coach Tom Crean, N.C. State coach Mark Gottfried, Seton Hall coach Kevin Willard and Maryland assistant Bino Ranson. Antoine finished with a team-high 22 points and Lewis poured in 12 in the victory. Both guards have been the topic of conversation this summer as strong performances on the circuit and at camps continue to raise their profiles. Lewis is fresh off a stand out performance at the Under Armour All-America camp, where Evan Daniels of Scout and Jeff Goodman of ESPN proclaimed Lewis among the top players at the event. For the 6-foot-5 Ranney School guard, praise of that caliber shows him his hard work is paying off. “I feel like it’s a huge accomplishment,” Lewis said of his success at the camp. “The fact that I went there and did exactly what I was supposed to do, and did things and worked on things that I usually don’t do, and it’s working, that means the things that I’m working on are working.” With a high-profile performance at a high-profile camp, high-profile interest followed for Lewis. “Just a lot of interest from University of Texas, Kansas, and Ohio State.” Lewis said, following up that no official offers have been extended. The player behind the game-winning shot, Antoine, has had a successful summer of his own. Participating in Steph Curry’s SC30 Select Camp Antoine received wise words from some of his elders who were there. “The older guys like T Ferg [Terrance Ferguson] and them, they told me to man up, protect the basket, be a man, and take over the game,” Antoine said. “As you can see from this game, that’s what I kind of did.” Ferguson is one of the top rated players in the class of 2016 and a five-star recruit who is headed overseas to play after not qualifying at Arizona. Getting guidance on the court from a player of that level is something Antoine appreciated. “If a person of that caliber can tell you that you’re the man, it means a lot,” Antoine said. “So obviously I’m going to go out there and protect the basket.” As for any recent offers Antoine said he wasn’t aware of anything official, but said he was sure there’s some coming. For the star duo of Team Rio moving forward they said they’re going to get ready for the upcoming school season as the summer progresses. Still a couple years away from the next level of basketball, the two are already off to a good start for continued success.
Follow Dennis on Twitter Follow Adam Zagoria on Twitter And like ZAGS on Facebook

Canada Falls to France at Olympic Qualifying Final, Out For Rio