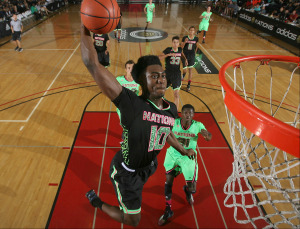 In a wide-ranging interview with Evan Daniels of Scout.com, Jaylen Brown, the No. 1 player in the Class of 2015, said he’s added North Carolina to his list and discussed several schools he’s considering. The 6-foot-6 Brown is set to visit Kansas this weekend for “Late Night in the Phog,” Kentucky Oct. 17 for “Big Blue Madness” and potentially UCLA on Nov. 15. “My first one is next weekend for Late Night in the Phog at Kansas,” Brown told Daniels at the USA Basketball mini-camp in Colorado Springs, CO. “Then I have one the following the weekend at Kentucky for Big Blue Madness. Then I have an unofficial date for November 15th with UCLA but that might get pushed up, but it might not.” He also plans to visit Georgia and Georgia Tech, his local schools. “Absolutely,” he said. “I plan on going to visit. I haven’t decided if it’s going to be officially or unofficially yet, but I’m going to take a visit to both of those schools because they are both right there. I’m trying to take as many visits as I can because it’s a big decision.” On Kansas, Brown said: “Coach [Bill] Self is a great guy. When he came in he was really humble. He told the struth. I felt like everything eh told me was how it would be when I got there. He didn’t tell me any lies. He told me it would be hard when I got there. He said it wouldn’t be easy. I told him nothing should be given to me and that’s the best way to get it some times. Assistant coach [Norm] Roberts is a great guy. He’s humble and down to earth. Kansas is a great university.” On Kentucky: “Coach Cal. Everything about Kentucky is phenomenal. The development of the basketball players and how they get them prepared for a high-level of college basketball in a matter of weeks or months, its shows how good of a coach, coach Cal is. Kenny Payne is a great coach. They talk to me about development. When I talk to them they don’t always talk to me about coming to Kentucky, they talk to me and tell me what I need to improve and I respect that and I appreciate that. They are coaching me before I get there.” On UCLA: ” Coach [Steve] Alford is a great guy and coach [David] Grace, the assistant there, is a great guy too. UCLA is a beautiful university. They have a lot of pro guys that go work out there during the summer. It’s just show time basketball. I love the way they get up and down and things like that. I could see myself playing in that style being up and down. It’s just a great university.” On North Carolina’s entry into his recruitment: ” North Carolina came in a little bit late, but North Carolina is a great university and you can’t just knock them off the list. You have to at least see what they have to say and maybe I’ll do a visit or something with them. Coach Roy is a great coach. It’s a great university. I always thought of myself as going to North Carolina. It’s a great university. That was my dream school growing up believe it or not. They haven’t recruited me as much as I’d like them.”