With Napier, Boatright, Daniels Returning to UConn, Huskies Should Be Strong 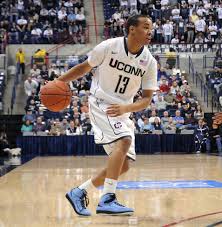 Shabazz Napier , Ryan Boatright and DeAndre Daniels are all returning to UConn and that bodes well for the Huskies’ chances at a postseason run in 2014. UConn was banned from the postseason this year because of sub-standard APR scores but can now look to making it back after settling into the American Athletic Conference that will also feature defending NCAA champion Louisville, Memphis, Temple, Cincinnati, SMU and Rutgers, among others. “We think we have a great team for next season,” Napier said, “and we’re excited about playing for a conference championship and in the NCAA Tournament.” Napier was not projected to go drafted and scouts thought he should return to school. His decision follows those of Louisville guard Russ Smith and Creighton forward Doug McDermott on Thursday. “I think Shabazz’s decision is great for him and great for the university,” said UConn head coach Kevin Ollie. “I believe that first and foremost, it will give him a chance to earn his degree, which is something I know he’ll really cherish. “At the same time, he’ll continue to hone his skills as a lead guard and contribute to us continuing the success of UConn basketball, but also he will keep cultivating Napier led the Huskies in scoring last season at 17.1 points per game. Boatright, a sophmore, was second on the team in scoring (15.4) and assists (4.4), while Daniels, a sophomore, was third in scoring (12.1) and tops in rebounding (5.5). “I’m pleased that all three of them will continue their education next year and their development as young men,” Ollie said. “As far as basketball is concerned, all of them improved last season and I expect that to continue through next year. We’re all looking forward to what’s ahead of us.” The Huskies also bring in New York guard Terrence Samuel, who can now study under Boatright and Napier, and forwards Kentan Facey of New York and Amida Brimah of Florida. With only 10 teams in the American Athletic Conference — the football schools from the old Big East — UConn should be right up near the top along with Louisville. **For the latest on Who’s In and Who’s Out of the NBA Draft, click here.

Daniel Hamilton: 'I could see myself at UConn'