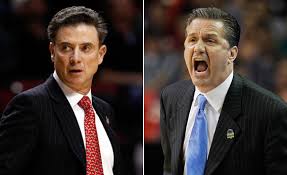 NORTH AUGUSTA, S.C. — Rick Pitino is excited for the upcoming basketball season and not just because his Louisville Cardinals should be the favorite to win the Big East Conference. Pitino knows that Indiana, Louisville and Kentucky — traditional basketball rivals all located within a few hours of one another — could all contend for an NCAA championship. According to The Sporting News preseason rankings, Indiana is No. 1, Louisville No. 3 and Kentucky No. 5 (UCLA is No. 2 and Ohio State is No. 4). “In our region, basketball’s really come back in a big way with Indiana, Kentucky and us,” Pitino told SNY.tv. “It’s been a while since all three have been there so it’s really picked up the fervor of basketball. Basketball is very big in Kentucky and Indiana anyway.” A year ago, of course, Kentucky beat Louisville in the Final Four in New Orleans en route to the first NCAA title of coach John Calipari’s career. Kentucky sent six players to the NBA Draft, including the top two picks in Anthony Davis and Michael Kidd-Gilchrist, yet Calipari has brought in another elite recruiting class led by Nerlens Noel, Archie Goodwin and Alex Poythress. Indiana, meantime, returns sophomore forward Cody Zeller, who would’ve been a lottery pick had he come out, and brings in a strong recruiting class of its own led by Yogi Ferrell, Jeremy Hollowell and Hanner Perea. “We got five recruits,” Indiana coach Tom Crean told SNY.tv at the Peach Jam. “Yogi Ferrell is the highest-ranked along with Jeremy Hollowell and Hanner Perea. and I would expect all three of those guys are going to have an impact.” Crean, whose team beat then-No. 1 Kentucky, 73-72 last December in Bloomington on a buzzer-beating 3-pointer by Christian Watford, believes Indiana will be ready to challenge at the very top this year. “If you look at paper that’s the way basketball history has really been in that part of the country and now we’re finally a part of it because we got our progam back up to where it can be in the same conversation with those programs [Kentucky and Louisville] and I think that’s a really good thing,” Crean said. Indiana won’t play Kentucky this season because the series was discontinued, which is too bad for basketball fans in general and the fans of those programs. “We’re not playing Kentucky because the series is dropped now because we couldn’t come to an agreement on where the games would be played moving forward. so hopefully that will change some day,” Crean said. Still, Crean knows the passion for all three schools will be stirred up even more this year if they all battle for Final Four berths. “I think it means so much because the energy of the fan bases and the passion of the fan bases, you can’t quantify how strong that is,” he said. “It doubles, triples, quadruples because people are so passionate about their schools in that area. “And it’s not like you can love one and like a couple others. It’s a big love/hate relationship going there.” 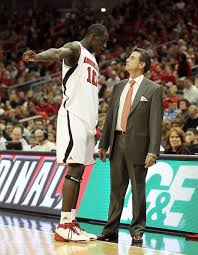 Louisville, meantime, returns Gorgui Dieng, Peyton Siva, Chane Behanan and Wayne Blackshear from its Big East Tournament championship team and adds  George Mason transfer Luke Hancock. “If we could match last year’s attitude, we’ll be very good,” Pitino said. “But that’s always a big question. We were very humble, very hungry to get it done. If we have those same ingredients, we’ll be very good.” The 6-11 Dieng could well be the Big East Preseason Player of the Year. “I think he’s the premier shot-blocker in college basketball, I really do,” Pitino said. “He’s really learned the American game of how to block shots, how to stay down and he’s a very, very intelligent person. He’s much more intelligent than most kids. He speaks more languages, he picks everything up right away.” Pitino called Blackshear a “tough kid,” who doesn’t back down to too many people. The 6-6 Hancock is a wing whom Pitino called “maybe our best and smartest basketball player…He’s going to add another dimension to our team as well.” Despite his abundance of riches, Pitino is not looking ahead to March during the summer. “It’s every coach’s team to try and get back [to a Final Four], but the one thing I don’t do and have never done, is I never plan for March in November or December,” Pitino said. While Indiana and Kentucky don’t play, Louisville and Kentucky play each other every year. Kentucky lost some veteran leadership with Darius Miller, Doron Lamb and Terrence Jones now in the NBA. 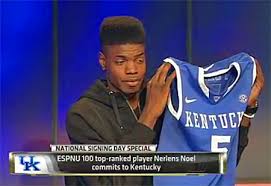 They will rely heavily on the new group of freshmen, along with a pair of former N.C. State players, point guard Ryan Harrow and shooting guard Julius Mayes.  “I’ve got an all new team again,” Calipari told Andy Katz of ESPN. “I have Ryan Harrow, a veteran point guard for the first time in a long time and he’s a very good player. He’s really playing well. And we’ve got Julius Mays coming in as a senior who’s going to play for us. We’re going to be young, but we’re going to be young every year. We’re going to start three, maybe four freshmen again this year. But we don’t have excuses. This is who we are. This is how young we are. “You think anybody is feeling sorry for us that we lost everybody? It’s like, ‘This is our time to beat Kentucky.’ But I’m telling you, I’m going to have a good team again. Now, will they be as good a team as we just had? I don’t know. We weren’t very good early in the year last year if you remember and then by the end of the year we were like really, really good. This year’s team will have to do the same.” Assuming Noel is cleared academically, which Calipari expects he will, all three teams — Kentucky, Indiana and Louisville — could be really good. And that could make for a special year in college basketball. “I think it’s great for the fans,” Pitino said. “It’s great for our area, it really buiilds big-time interest in college basketball.” ***