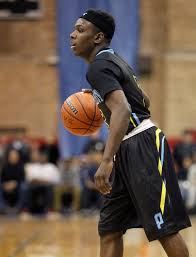 PHILADELPHIA — After missing the first two games of the Reebok Breakout Challenge to be in summer school, Aquille Carr made his grand entrance Thursday afternoon. And even John Wall had to check out “The Crime Stopper.” Wall watched the 5-foot-6 Seton Hall commit put up a team-best 18 points Thursday evening as the Friars won in a 73-45 rout of the Wildcats. That followed a 14-point outing in his team’s loss earlier Thursday. Carr said he and the former No. 1 draft pick have developed a friendship. “One time he came to my basketball game and ever since then, we talk over Twitter and all that,” Carr said of Wall. “He gave me great advice. He told me to never give up and just keep playing basketball. Don’t worry about any stress on the basketball court.” Carr, who committed to Seton Hall last year as a junior, said that until camp ends Friday, he plans to go back and forth between Philly and his home in Baltimore because of summer school. Still, Carr said he believes he’ll be qualified for college in 2013. “I’m just getting extra classes in right now so I can have more credits so that I’m not behind in anything,” he said. “My grade point average is probably like a 2.8 now. “I’ll be fully qualified.” Seton Hall coach Kevin Willard stood at the top of the bleachers to watch Carr, and the future Pirate appreciated it. “It feels good that he came out and supported me because I know he wants me to play good and show my talent off,” Carr said. Carr said he plans to spend his senior season at Baltimore Patterson High after briefly attending St. Patrick at the end of last year. “My uncle lives in New Jersey so I had moved up there to get away from a lot of stuff, but then I went back home because my daughter had got sick,” Carr said. Averi Carr is 4 months old, and her father must balance being a father with attending school and playing hoops. “It’s easy because when I’m around her it takes a lot off, I don’t really worry about anything and when I’m on the court I don’t really worry about anything, either,” he said. “It ain’t that hard on me.” There are coaches who wonder about Carr’s ability to blend into a team concept and play with others. He is known as a prolific scorer but questions linger about his ability to make others better. “I just don’t know if he can play with others,” one Division 1 assistant said. Still, Carr said he’s looking forward to getting to Seton Hall in 2013 and making them better. “I’m definitely going to Seton Hall, they’re definitely my dream school,” he said. Carr and Texas transfer Sterling Gibbs could both suit up in 2013 if Gibbs’ hardship waiver request remains denied, as was reported here earlier. But Carr believes the two can coexist in the backcourt. “We’ll play good together because I can score and I can pass,” he said. “I can help my teammates out a lot, I can play defense. “We’ll be a good backcourt.” As for the Pirates as a whole once he gets there, Carr said: “We can be great, we can be great. We can really make it happen.” Photo: NJ.com