St. John’s Harkless May Be Headed Out West 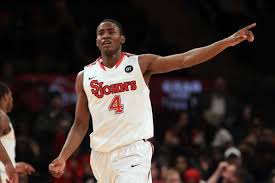 Moe Harkless was born and raised in Queens, N.Y. before playing one year of college ball at nearby St. John’s. But the native New Yorker could end up getting drafted to play out on the Left Coast. The 6-foot-8 Harkless is finishing up his workouts with a pair of tryouts today (Monday) in Sacramento after spending Sunday with Golden State and last Wednesday with Portland. One source close to Harkless says his gut tells him the Trail Blazers will select Harkless at No. 11 in Thursday night’s NBA Draft at The Prudential Center. “I mean, there’s a lot of teams,” Harkless, 19, told SNY.tv by phone Monday from his hotel room in Sacramento. “I just came from Portland and Golden State. Those guys are really high on me.” Golden State selects at No. 5, Sacramento at No. 7 and Portland owns the No. 6 and 11 picks. Asked if any team had guaranteed him they would select him, Harkless said, ” No, nobody’s told me that yet.” DraftExpress.com has Harkless going to the Orlando Magic at No. 19. The Big East Rookie of the Year, Harkless averaged 15.5 points and 8.6 rebounds while playing primarily under St. John’s assistant Mike Dunlap, who was recently named the head coach of the Charlotte Bobcats. Though he played out of position at power forward for Dunlap and Johnnies head coach Steve Lavin, Harkless projects to be a small forward in the NBA. “I think, in the NBA, he’s got to get stronger and tougher,” longtime New York recruiting expert Tom Konchalski told HOOPSWORLD. “I think he has tremendous upside. Down the road he can be a really, really good NBA player. I think it’s going to be a bit of an adjustment physically, in terms of how hard he’s got to play and how he can’t take plays off. He’s got to play every possession. I think that’s going to be a bit of an adjustment for him.” He added: “In the NBA, when he plays against 3-men, with his athleticism, and his quickness, initially he may struggle some. But eventually I think he’ll be a terrific player and he’s a really, really good kid.” Harkless was excited by the draft process at first, but at this point he’s exhausted, tired of the travel and ready to get back home to his mother, Rosa, and his brother, Tyler. “It was fun at first, though, but after the first few it got tiring,” Harkless said. “I got like two days off and I got to go back to IMG [Academies in Bradenton, Fla.]. Other than that, since the [Chicago] combine I haven’t been back home.” Harkless said it took him nine hours Saturday to get from Houston to California because he arrived early at the airport but his flight departed late. “I think traveling the hardest part is eating right, taking care of your body, going through all this stuff you gotta do,” he said.
When he arrives back in New York, Harkless plans to attend the Draft in Newark, regardless of whether’s he’s invited among the Green Room participants.
“Oh, yeah, I think so,” he said. Yet with all the workouts, he hasn’t had time to stop and appreciate what it will feel like the moment Commissioner David Stern steps to the microphone and utters his name. “No, not really,” Harkless said.”I haven’t got time to think about it yet. It’s just really crazy how close it is. I can’t wait.” What he has thought about is how getting draft will alter his life and that of his mother. “I definitely want to move her into a nicer area and get a car maybe,” Harkless said of his mother, who lives in Jamaica, Queens. “It’s up to her. I think she want to move out to Long Island or something like that. Whatever she decides is fine with me.” Of course, Rosa could end up moving out West if Harkless ends up somewhere like Portland. “Either way it will be cool,” Harkless said. “Coming out West would definitely be different but I think it would be a lot of fun and a good opportunity.” Right now, though, after all the travel and all the workouts, Harkless has just one thing on his mind. “Today’s my last [workout],” he said. “I can’t wait to be back home.”