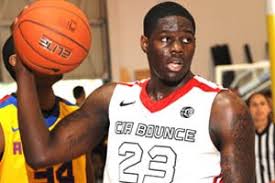 Anthony Bennett is down to two schools. UNLV and Oregon. The 6-foot-7 Findlay Prep forward has eliminated Kentucky and is expected to make a decision within a week or so. “He really likes Kentucky,” CIA Bounce coaches Tony McIntyre and Mike George told SNY.tv. “He loves what they’re doing there. But Anthony feels it would be a better fit at UNLV or Oregon. “He likes Oregon and UNLV better. He has a chance to be an immediate impact” at those schools. The coaches said Bennett is expected to announce by the “end of this week.” Bennett on Friday eliminated Florida and cut his list to three, also indicating that he wanted a chance to play major minutes and that Bradley Beal’s departure for the NBA Draft played a role. Now, he’s down to two. Bennett visited UNLV last week with his mother and thoroughly enjoyed the visit. “He loved the staff,” Findlay assistant Todd Simon told SNY.tv. “He connected well with them. His friend Khem Birch is on the team.” Bennett and Birch are both Canadian and would give UNLV a potential future pro frontcourt should they team up. Bennett also took an unofficial to Oregon around the Nike Hoop Summit and his Findlay Prep teammate, Dominic Artis, is headed there to play point guard. Oregon is also involved with Chris Obekpa, who is also considering Cincinnati, St. John’s, Providence and DePaul. The Ducks hope they land at least one of these forwards soon.