Lavin Headed to Europe to Recruit 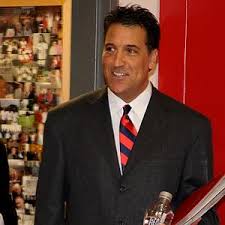 St. John’s head coach Steve Lavin is on his way to Europe to recruit. Lavin flew Wednesday to the World Basketball Tournament in Tourcoing, France. Canarias Basketball Academy coach Rob Orellana, whose team is participating in the event, tweeted, “Look forward to seeing you 2moro Steve! Safe flight.” St. John’s assistants Mike Dunlap and Tony Chiles also made the trip. Orellana Tweeted that coaches from “Florida State, LSU, Tulane, St. Bonaventure, Portland and San Diego are here this week & 6 of the 7 in attendance r Head Coaches!” The rosters for that event are here, although they are not up to date. For example, both Nerlens Noel and DaJuan Coleman are listed as being on the American team, but neither made the trip. Savon Goodman of Philly did make the trip. Lavin is also planning a trip to Belgium and to the Canarias Basketball Academy off the coast of Spain, which has fed three players to Seton Hall. The CBA roster includes several really big kids, including 6-10 Jito Kok, 6-11 Volodomyr Gerun and 7-3 Boris Bojanovsky. The Johnnies are also expecting a visit this month from Monroe (N.Y.) College guard Marco Bourgault and Monroe forward Orlando Sanchez April 20-22. Bourgault will also visit Louisiana Tech on April 16th, he told SNY.tv. He’s also planning visits to Penn State and St. Louis. St. John’s target Chris Obekpa is expected to visit Oregon having already visited DePaul, Cincinnati, St. John’s, Providence and UConn, but no date has been finalized. Sources said Obekpa may end up choosing between Cincinnati and St. John’s. There is no update on forward Michael Chandler, who is awaiting news on his academic standing from the NCAA, according to his uncle, Allan.
***