Waiters: 'It felt like we were playing 5-on-8' ; Source says it was his final game at Syracuse | Zagsblog
Follow @adamzagoria

Waiters: ‘It felt like we were playing 5-on-8’ ; Source says it was his final game at Syracuse 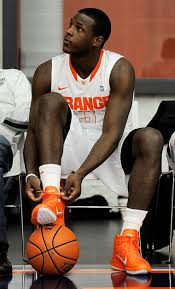 BOSTON — Dion Waiters summed up the feelings of many Syracuse players, coaches and fans when asked about the referees following Syracuse’s 77-70 loss to Ohio State in the East Regional final. “I feel as though a lot of calls went the other way,” a downtrodden Waiters, who appears to have played his final game at Syracuse, said in the corner of the locker room. “Plain and simple. It felt like we were playing five-on-eight.” Syracuse was called for 29 fouls, leading Ohio State to go 31-for-42 from the line. Ohio State was whistled for 20 fouls and Syracuse went 20-for-25 from the line. The officiating crew of John Higgins, Michael Nance and Thomas O’Neill were roundly criticized by many Syracuse fans in the arena and others around the Twittersphere. Asked to comment on the refs, Syracuse coach Jim Boeheim said, “No comment.” Asked if he was given an explanation for the technical he received in the first half, Boeheim said, “No. First one in about three years, I think.” Higgins, the crew chief, said Boeheim “was assessed for being out of the coach’s box and gesturing about a call.”  He added that official O’Neill said: “That was the third or fourth time and I said ‘enough.'” Scoop Jardine, who played his final game in a Syracuse uniform, took the high rode. “We’re not going to blame it on the refs. I think we had a chance to win the game no matter what, with the refs or without them giving us any calls. So for the most part, I want to give Ohio State credit and congratulate them on going to the Final Four.” Still, Syracuse simply couldn’t manufacture enough offense down the stretch and were outscored 48-41 in the second half and 7-3 in the final 36.8 seconds. “I didn’t want to go out like this and I’m pretty sure everybody else didn’t want to go out like this,” said Waiters, who finished with just nine points on 2-for-8 shooting. “I don’t feel right. I don’t feel right. Waiters, a sophomore, is projected as a Top 15 or 20 pick in the NBA Draft and a source close to him told SNY.tv he has played his final game in a Syracuse uniform. “He is definitely not coming back,” the source said. Asked if the loss would impact his decision on whether to return next year, Waiters hesitated. “I mean, I would love to get revenge,” he said, “but at the end of the day we’re going to sit down, talk with my family and I’ll make a decision.” Photo: Syracuse.com