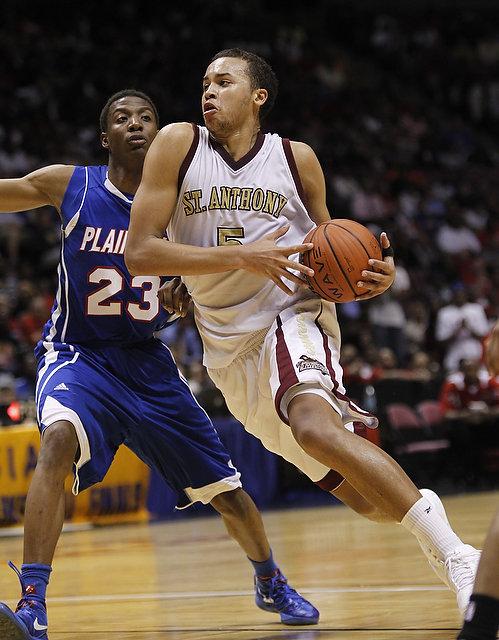 By JOSH NEWMAN Special to ZAGSBLOG EAST RUTHERFORD, N.J. —  When you look at Kyle Anderson, the stats are pretty outrageous, but none crazier than this. The 6-foot-9 UCLA signee has lost just once in the last three seasons at the highest level of high school basketball in New Jersey. That came in the 2010 Non-Public North B final against St. Anthony when Anderson was still at Paterson Catholic before the former North Jersey basketball powerhouse shut down after that school year. That March night at Rutgers was the last defeat he would taste and as Bob Hurley joked in the media room at the IZOD Center on Tuesday evening after St. Anthony’s latest Tournament of Champions win, Anderson couldn’t beat them, so he joined them.  When Paterson Catholic closed and some of the state’s top players went scrambling for homes, Anderson eventually picked the Friars and they have been better off for it. Anderson closed out a remarkable high school career on Tuesday with a 66-62 TOC final win over Plainfield in a rematch of last season’s final. With that win, St. Anthony’s 12th TOC championship under Hurley, Anderson’s resume has reached all-time status. A 93-1 mark over his last three seasons, including 65-0 and two TOC crowns in his two years under Hurley. The question begs asking. Is Anderson the greatest player at the state’s preeminent boys basketball power? “He’s the most complete player to ever play at the school,” said Hurley, the Naismith Hall of Famer. “In a time when we’ve had some really good ones, his overall game and just what he’s done over these last two years is remarkable. “This was Jerome’s [Frink’s] statistical game today and Tariq Carey statistically played very well. But the blood and guts and the glue, the play that makes us the team we are is Kyle Anderson.” Frink finished with a game-high 26 points and shot 13-for-23 from the field, while Carey added 18, but Anderson did what he has done so many times before. The 14 points, five blocks, four steals and four assists does not tell the entire story. The way he so completely controls a game from baseline to baseline is what has Bruins fans and head coach Ben Howland salivating at the possibilities. There have been comparisons to Magic Johnson and while that may seem crazy, it’s not unfair. “Coach told me to look for other guys and I found Jerome underneath a bunch of times, Tariq, Hallice [Cooke] out on the perimeter and it wasn’t a game where I was scoring much,” Anderson said. “It was a game where I was able to get my teammates involved.” The most complete player in St. Anthony history will now turn his attention to the McDonald’s All-American Game next week in Chicago. He will not only be playing, but he will be recruiting as highly-touted Class of 2012 recruits Shabazz Muhammad and Tony Parker remain on the big board and are considering UCLA. As first reported Sunday by SNY.tv, the 6-6 Muhammad will take his final official visit to UCLA before deciding between the Bruins, Kentucky, Kansas, Duke, Arizona and UNLV. Anderson told SNY.tv Monday that if Muhammad were to join him in Westwood, the Bruins could reach a Final Four and challenge for another NCAA banner. “I’m excited for the McDonald’s Game, but with Tony and Shabazz, I’m just going to let them live the moment because it’s a great process to be a part of for those two kids,” Anderson said. “I’m not gonna pressure them to go to UCLA with me, I’m gonna put it in their head, but it’s up to them. It’s a decision I want them to be happy with.” Photo: Tim Farrell/NJ.com Follow Josh Newman on Twitter