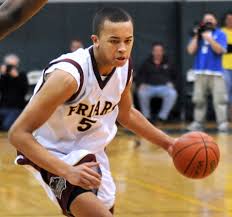 ROSELLE, N.J. — Kyle Anderson still hasn’t lost in a St. Anthony uniform. The 6-foot-9 point guard is now 52-0 in a Friars jersey after St. Anthony, No. 5 in the Five Star Power Rankings, downed No. 6 Huntington (West Va.) Prep 50-49 before a capacity crowd at Roselle Catholic High School. After the Friars (19-0) came back from a 10-point first-half deficit, Anderson was asked if this was the best team St. Anthony has played this season. “Oh, yeah, without a doubt,” said Anderson, who finished with 18 points, 5 rebounds, 5 assists and 3 steals in the win. “You know, a lot of major Division 1 players [on Huntington]. They were really good.” After Xavier Rathan-Mayes hit a 3-pointer with 2:15 left to put Huntington up 49-48, Anderson’s dish to teammate Jerome Frink for a layup at the 1:12 mark gave St. Anthony a 50-49 lead. Huntington’s Negus Webster-Chan missed a 3-pointer at the buzzer that could’ve won the game. St. Anthony outscored Huntington, 29-24, in the second half as Naismith Hall of Fame coach Bob Hurley ramped up the verbal chatter at both the referees and the Huntington Prep bench. At one point early in the fourth quarter, Hurley told Huntington coach Rob Fulford to “sit your ass” down after St. Anthony forced a turnover on the sideline. “I guess what happened in the second half is, this game’s in New Jersey,” Hurley said. “I said to the kids in a couple timeouts, ‘The crowd wasn’t going to help us, but it was going to hurt them.'” Said Fulford: “He got in the refs’ ass at the start of the fourth quarter and that changed the momentum of the game. I know he’s a Hall of Famer, but I say my peace, too. “He’s a great coach.” Still, the two coaches hugged after the game. “Our assistant coach [Ben] Gamble talked about signature wins,” Anderson said. “That was a big signature for our team, and it will help us carry momentum into the rest of the season.” St. Anthony has now survived 1-point victories over St. Benedict’s and Huntington and their remaining schedule doesn’t look nearly as daunting. They still must go to St. Raymond’s to play Thomas Jefferson and host Brooklyn Lincoln before the New Jersey state tournament where they could face Gill St. Bernard’s but none of those teams are as loaded as Huntington Prep, which features six Division I juniors and seniors plus sophomore Andrew Wiggins, the top prospect in the Class of 2014. This has been an eventful week for Anderson, who was chosen this week for the March 28 McDonald’s All-American Game. “It feels great, but it’s something I want to save to be happy for the end of the season,” Anderson said. “We still gotta lot of work to do with our team.” A year ago, the Friars went a perfect 33-0 en route to the mythical national title, and Anderson has said his goal is to repeat. Still, leading into the McDonald’s Game, he plans to continue to work on uncommitted seniors Shabazz Muhammad and Tony Parker, both of whom were selected to the game and both of whom are considering UCLA. “I’m going to be in their ear about it,” Anderson said. “But it’s up to them. I’m going to put it out there that we really need them.” He added: “I don’t want to put too much pressure on them. I just want them to go where they want to go, but they’re best of friends of mine so I’m going to talk to them regardless.”