SOUTH ORANGE, N.J. — Jordan Theodore is hoping Kemba Walker’s success rubs off. The two were teammates on a highly successful New York Gauchos AAU program and remain close friends. Walker, of course, led UConn to Big East and NCAA Tournament championships last year before getting drafted by the NBA’s Charlotte Bobcats. Entering his senior season at Seton Hall, Theodore hopes he can approximate Walker’s success. “It was motivation because I grew up playing with him and knowing that we grew up together,” Theodore told SNY.tv Wednesday at Seton Hall’s media day. “We played on the same team and I can do it, too. “I’m actually probably in one of the same predicaments as him, because last year he led his young troops to every championship and an NCAA championship. 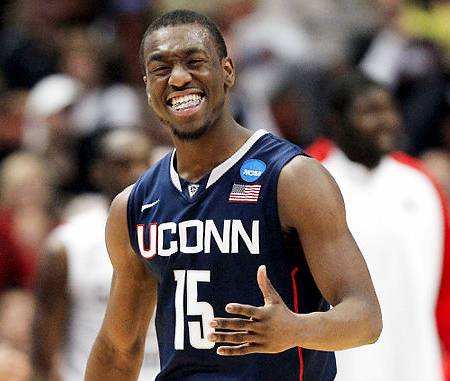 “Why can’t I?” UConn featured seven freshmen on last year’s roster, and this year’s Seton Hall roster has six. Still, the Pirates were picked 13th in the preseason coaches’ poll and have a huge hill to climb just to finish in the top eight of the Big East. Theodore said Walker gave him this advice entering his senior season: “Kill ’em, kill ’em all.” A former Paterson Catholic star from Englewood, N.J., Theodore is coming off a rough junior season in which he averaged 11 points, 4.4 assists and 3.1 rebounds but really struggled at times. “Jordan went through growing pains last year,” Pirates coach Kevin Willard said. “He tried to play too fast. He has matured as a person and as a point guard. I have absolute confidence giving him the ball and telling teams, ‘Good luck stopping him.’ I feel he’s a top-level point guard in this conference.” Like Walker, who paired in the backcourt with freshman Shabazz Napier, Theodore will spend some time at the two guard spot, with one of the freshmen playing the point. Sean Grennan and Freddie Wilson are both freshmen guards capable of being the lead guard. “I think we’re almost the same player,” Theodore said of Walker. “He developed his game to just something totally different from mine, but I think this summer I got to change my game. “I’m going to be moved to the two, like [Walker] moved to the two. And I’m going to be able to show people that I can do some things. I’m a way better shooter and I’m a better creator now than I was.” Said Willard: “We’re expecting big things from Jordan this year.” FREE THROWS The status of freshman big man Kevin Johnson is still under review by the NCAA and he is not practicing with the team….Fellow freshman big man Brandon Mobley underwent rotator cuff surgery — “It went great,” Willard said — and the coach said he “should be back hopefully Dec. 1…Transfers Brian Oliver and Gene Teague both look good in practice, but must sit a year per NCAA transfer regulations. “If Brian could be eligible this year I wouldn’t be answering a whole lot of Jeremy Hazell questions,” Willard said. “He would’ve walked right into that role.”…Willard expects a big year from senior forward Herb Pope, who lost nearly 20 pounds this summer while training with John Lucas in Houston. “In my opinion, he’s either a first- or second-team all-Big East player,” Willard said….The Pirates will visit Boston College Saturday for a closed scrimmage and will also face UMass…Seton Hall opens the season Nov. 12 against St. Francis….Onetime Mississippi State commit Josh Gray, a 2012 point guard, will take an official visit to Seton Hall next Wednesday-Friday, he told SNY.tv. RELATED CONTENT **Slimmed-down Herb Pope spent summer with John Lucas