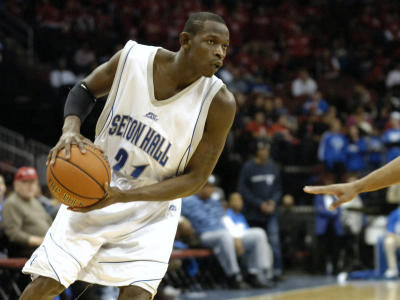 Jeremy Hazell is not exactly in the best position to get drafted. The former Seton Hall sharpshooter missed 13 games this season with a broken left wrist and was also the victim of a shooting during a robbery attempt gone bad in front of his Harlem home on Christmas Day. He had hoped to attend the Portsmouth Invitational in April in an effort to show his stuff for NBA scouts, but he was still recovering from wrist surgery and wasn’t cleared to play. “He would’ve been hands down the most impressive player there had he played anywhere near how he played during the season,” his agent, Seth Cohen, said Tuesday by phone. Now Hazell has a couple of NBA workouts scheduled and he hopes to make his mark before the June 23 NBA Draft. He has workouts today with the Golden State Warriors, on June 4 with the Sacramento Kings, June 12 with the Memphis Grizzlies and on June 16 with the Nets. Cohen is in the process of scheduling a couple of other workouts as well. “I think we have a challenge in front of us,” said Cohen, who also represents former Providence star Marshon Brooks, who works out for the Knicks Thursday, and former Pitt center Gary McGhee. “The fact that he wasn’t at Portsmouth was a major setback that would’ve enabled all sorts of teams to be able to see him,” Cohen added. “And with a looming lockout, there’s no summer league. That certainly doesn’t work in Jeremy’s favor, either. Under normal circumstances I would say he’s a very strong second-round pick. Now he’s going to get in front of as many teams as possible and the hope is we get drafted in the second round. “If we don’t we’re perfectly willing to play overseas one season in the Euroleague and put up great numbers and come back and get invites to play in summer league [in 2012].” A third-team All-Big East selection, Hazell averaged 19.8 points per game after averaging 20.4 as a junior. “What I like is he’s long, athletic and quick,” an NBA scout with 10 years experience said in March. “He’s a streaky shooter. The shooting comes and goes. His shot selection is questionable. “He’s probably a late-second round or free agent guy.” Earlier this season, Hazell said it was his dream to make it to the pros. “Oh definitely, I want to make it to the NBA and play for an NBA team next year,” he said. “That would be any basketball player’s goal, so that’s my goal.” Given his circumstances, that goal may have to wait a season or more.