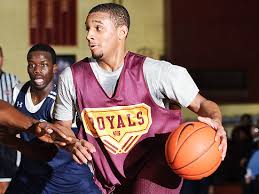 UPDATE 5/3: After this was initially posted, Corey Edwards texted to say he spoke with an assistant coach at Miami, not directly with head coach Jim Larranaga. He said the assistant coach “asked me  what do [you] think of Miami. He didn’t come out blatant and say would you come to Miami.” He also said, “In June I am goin to George Mason.” **** George Mason signee Corey Edwards said new Miami coach Jim Larranaga talked to him about following the coach to Miami and that he is considering it. “The coach from George Mason is talking about me going over to Miami,” Edwards said Monday by phone. “I told him it could be a possibility.” The news broke April 22 that Larranaga was leaving George Mason for Miami. Edwards said Larranaga called him “a couple days after he took the job.” “He called me and we were talking about is it possible that you would come with me?” Edwards said. On Saturday, former Georgia Tech coach Paul Hewitt became the new George Mason coach and Edwards said Hewitt is due to meet with Edwards and his family this week. “Coach is going to come to my house on Wednesday and talk to me and my family,” Edwards said of Hewitt. Asked where he was leaning, Edwards said, “I’m really kind of undecided right now. It depends on whether they’re going to let me out of my Letter of Intent and the discussions that me and coach have.” He added: “Miami is a good school. It’s an ACC school. It could be the right school. Coach Larranaga is a good coach.” Vaughn Gray, the St. Benedict’s Prep guard who committed to George Mason the same day Edwards did, said he would remain committed to George Mason. RELATED CONTENT **Hewitt on George Mason: ‘Just too good to turn down’ **Hewitt to George Mason **Larranaga move could impact locals (Photo courtesy Daily News)