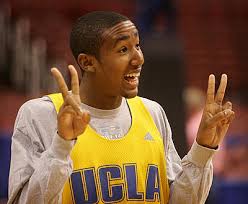 NEW YORK — All the championships and tradition didn’t help UCLA much this weekend in the Big Apple. The Bruins will leave the NIT Tip-Off with back-to-back losses to No. 7 Villanova and VCU, although they put up a good fight before falling to the Rams, 89-85, in the consolation game. Things won’t get much easier for Ben Howland’s crew, whose next game is Dec. 2 at No. 6 Kansas. “I think we have a good group of kids that are good kids,” Howland said. “They’re going to work hard. They’re disappointed right now. They have two losses in a row. And our next game is against Kansas against one of the best teams in the country…So we have a tough road ahead of us.” Junior guard Malcolm Lee (pictured) had 23 points, sophomore forward Reeves Nelson added 20 points and 10 boards and sophomore forward Tyler Honeycutt added 18 and 13. The Bruins don’t have a single senior on the roster and the good news is that help is on the way next year. North Carolina transfers David and Travis Wear will become eligible after transferring and the Bruins also get star recruit Norman Powell, Rivals’ No. 16 shooting guard in the Class of 2011 out of San Diego. “I like the two kids we have sitting out that become eligible next year in the Wear twins,” Howland said. “We signed a very good player in Norman Powell. I’m excited about the future.” Howland was asked if he had any regrets about leaving Pittsburgh for UCLA given that the Panthers are now No. 4 in the nation and a perennial powerhouse. “Not really. I’m proud of what we’ve accomplished at UCLA,” he said, presumably referring to three straight Final Fours from 2006-8. “I love Pittsburgh. I always will be very appreciative to Chancellor Nordenberg and to Steve Pederson for giving me that opportunity. “And when I left I really spoke out strongly that I thought it would be in the best interests of the program that they hire Jamie [Dixon], which they did. And Jamie has done a terrific job, continued success and is one of the finest coaches in the country. “I’m very happy where I’m at and feel very lucky. This is a childhood dream to be coach of UCLA, coming from the West Coast and watching all those teams.” RELATED CONTENT **UCLA ramping up Northeast recruiting Follow Adam Zagoria on Twitter And like ZAGS on Facebook.