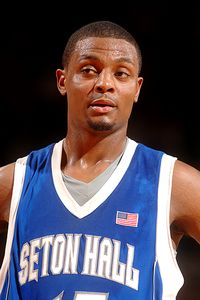 NEW YORK –– The biggest rumor flying around Big East Media Day here at MSG relates to a player who’s not even here. There’s a report out saying Seton Hall forward Herb Pope signed with Turkish professional team Antalya, but both head coach Kevin Willard and media relations contact Matt Sweeney said they knew nothing about it. “Herb is on campus. He’s been in class and this is all news to both [Willard] and Herb,” Sweeney said. Seton Hall was picked 11th in the Preseason Coaches’ Poll and both Jeff Robinson and Jeremy Hazell told SNY.tv in video interviews that they expect Pope to be a major contributor this season. Pope tallied 11.5 points, 10.7 rebounds, 2.0 assists and 1.8 blocks per game last season. FREE THROWS Five of the six Big East 1st-team players are from the NYC metro area: Kemba Walker, Ashton Gibbs, Jeremy Hazell, Corey Fisher & Kevin Jones. Only Austin Freeman, the Preseason Player of the Year out of Mitchellville, Md. is not Follow Adam Zagoria on Twitter

UConn Players Not Worried About Sanctions