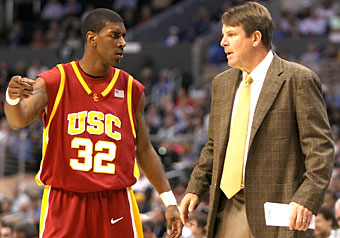 Things sure aren’t looking good for USC coach Tim Floyd and the athletic department at Southern Cal as  a whole. Yahoo! Sports, the same people who broke open the UConn/Nate Miles recruiting violations case, reported Floyd paid a runner in cash in order to help bring star guard O.J. Mayo to Southern Cal. Mayo is now in the NBA. Louis Johnson, a one-time Mayo confidant, has told both NCAA investigators and federal authorities that Floyd gave at least $1,000 in cash to Rodney Guillory, a man who allegedly gave Mayo improper benefits while the guard played at USC. USC is already the subject of an ongoing three-year investigation into its football (Reggie Bush) and basketball (Mayo) programs. No wonder the program didn’t want to risk taking on 6-10 McDonald’s All-American Renardo Sidney, whose own cloudy family financial situation would’ve stirred more suspicion around the program. Sidney ended up at Mississippi State, which will work with the NCAA to look into Sidney’s situation. If the latest allegations are proven true, USC could face major sanctions, including forfeitures of victories, probation, a ban on postseason play, the loss of television appearances or scholarship and recruiting restrictions. The NCAA may be seeking to demonstrate that USC has lost institutional control of its athletic program. “It makes sense,” Anthony V. Salerno, another of Johnson’s attorneys, told the L.A. Times. “The NCAA looks at the program as a whole, and you may be talking about systemic problems in these cases.” (Photo courtesy Getty Images)

John Riek the Next Thabeet?